Duly fortified after lunch,  we went out to explore the orchards around the hotel at Kalpa, Kinnaur.  This region is known for its apples, apricot, almonds, and chilgoza. Wherever we turned, there was something fresh to eat.  It was a pleasure to have the fruits without stickers. 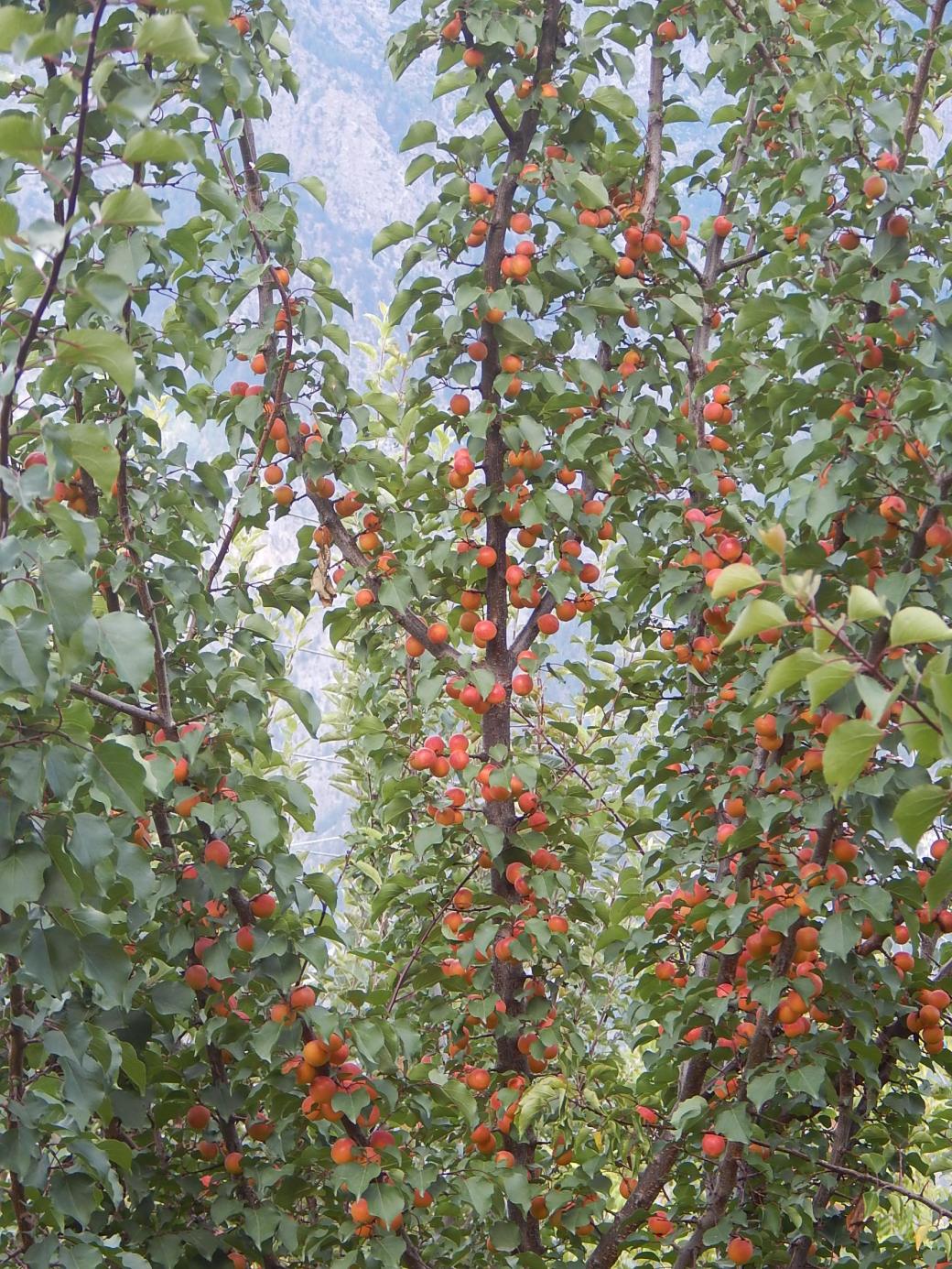 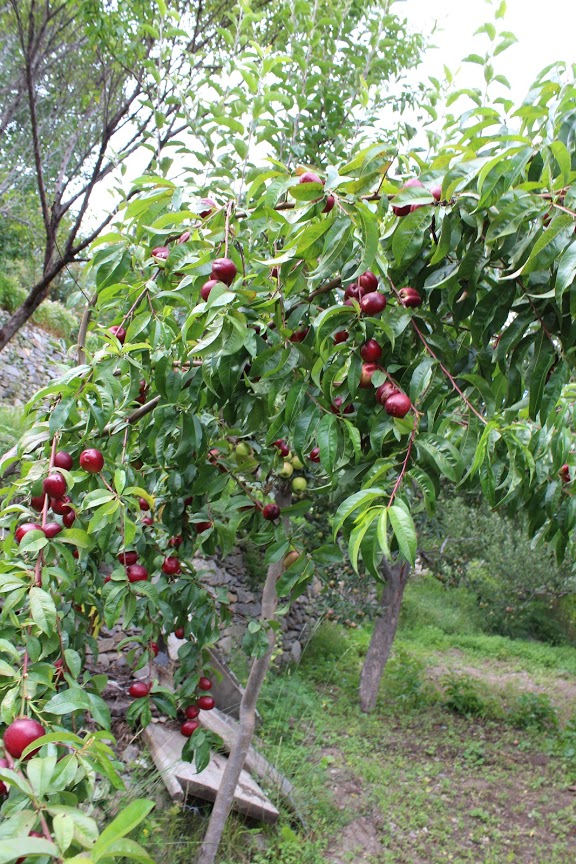 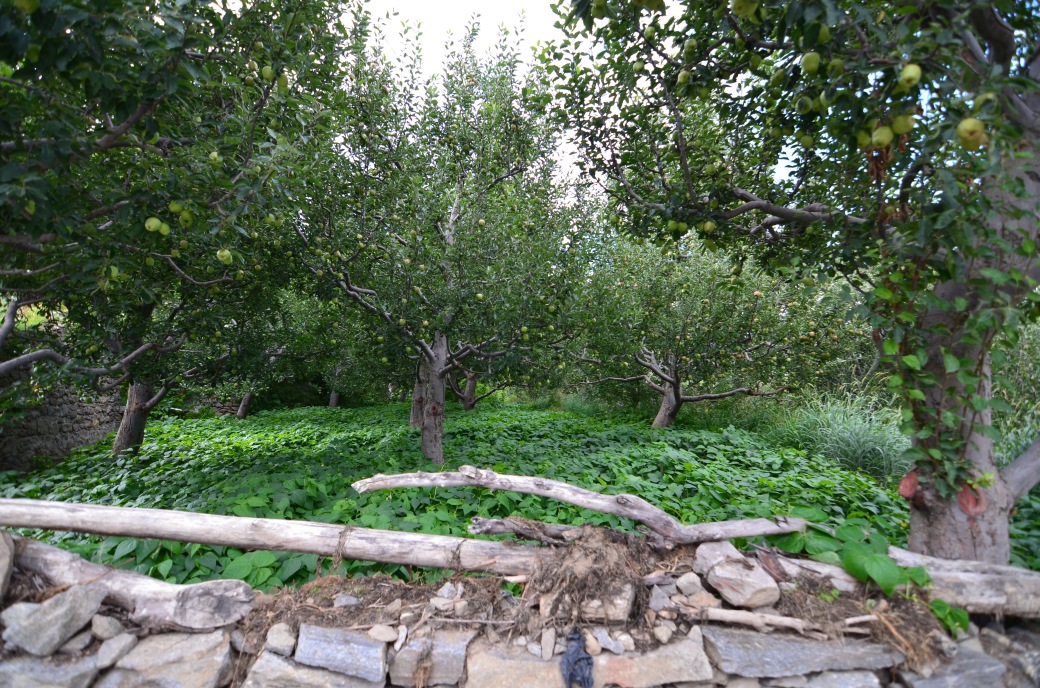 There were a lot of tourists and bikers staying at the hotel. The tourist season starts from March and in winter most of the hotels in the area remain closed as the temperature can drop to -15  degrees.  There are a couple of hamlets,  temples, and monasteries in Kalpa which are worth a visit but today  I want to do nothing but commune with nature. 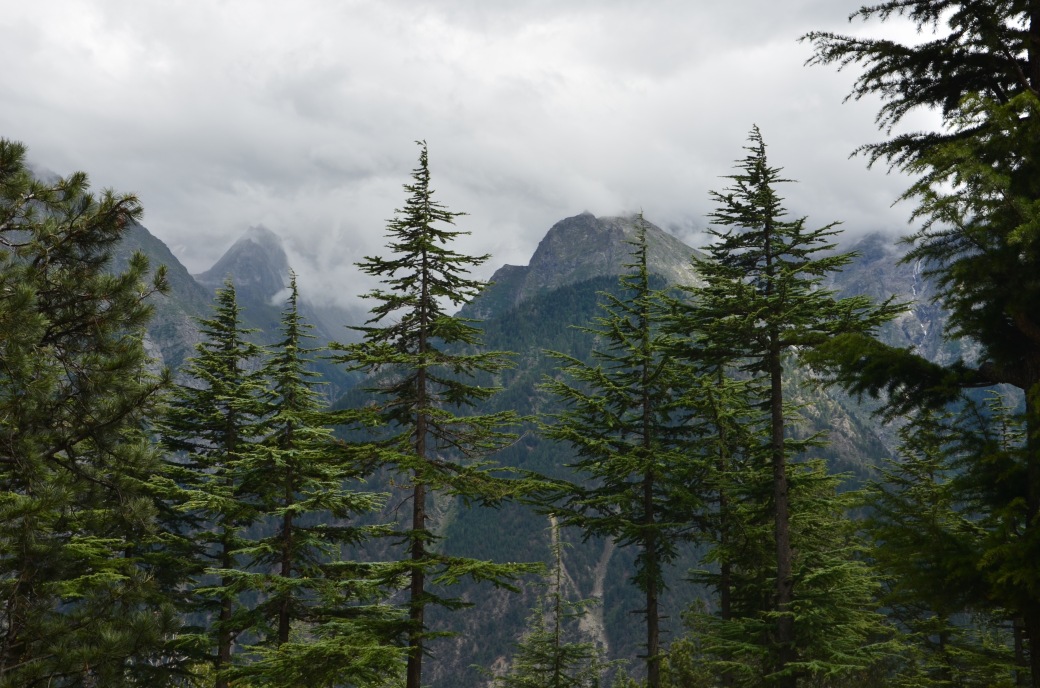 Kalpa is at a height of 2960 meters and I am gazing at mountains at 6000 meters. The majestic Kinnaur Kailash Range has  Raldang, Jorkanden, Kinner Kailash and a  17m rock pillar Shivling peaks. I couldn’t make out which is which.  All the peaks are enveloped in the clouds.  The glaciers stood out like thin white lines.

In mythology,  Kailash is the winter abode of Lord Shiva. In the month of August,  devotees take up a difficult trek to circumambulate the sacred mountain. 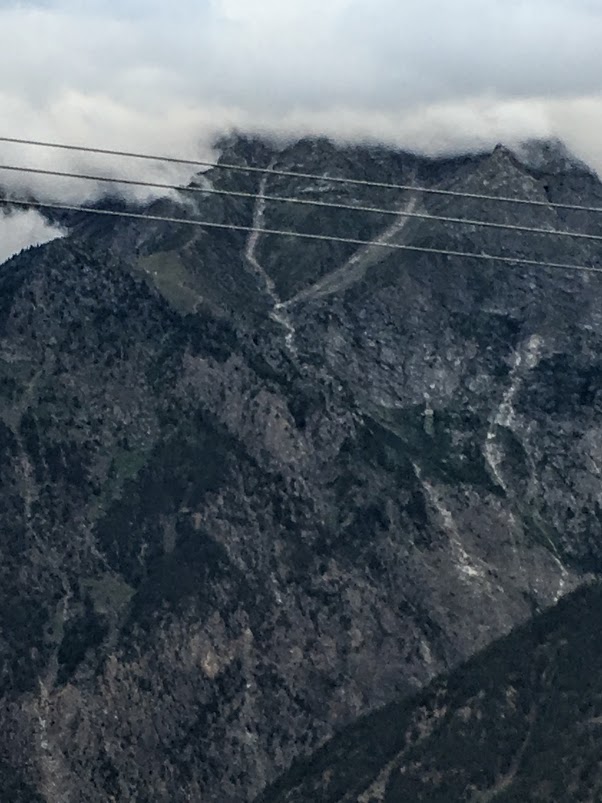 It was 18:30 and dark clouds were still hiding the peaks. I was content gazing at the vastness of the sky and the mountains. And then the clouds lifted and we could see a golden peak glowing with dazzling rays. 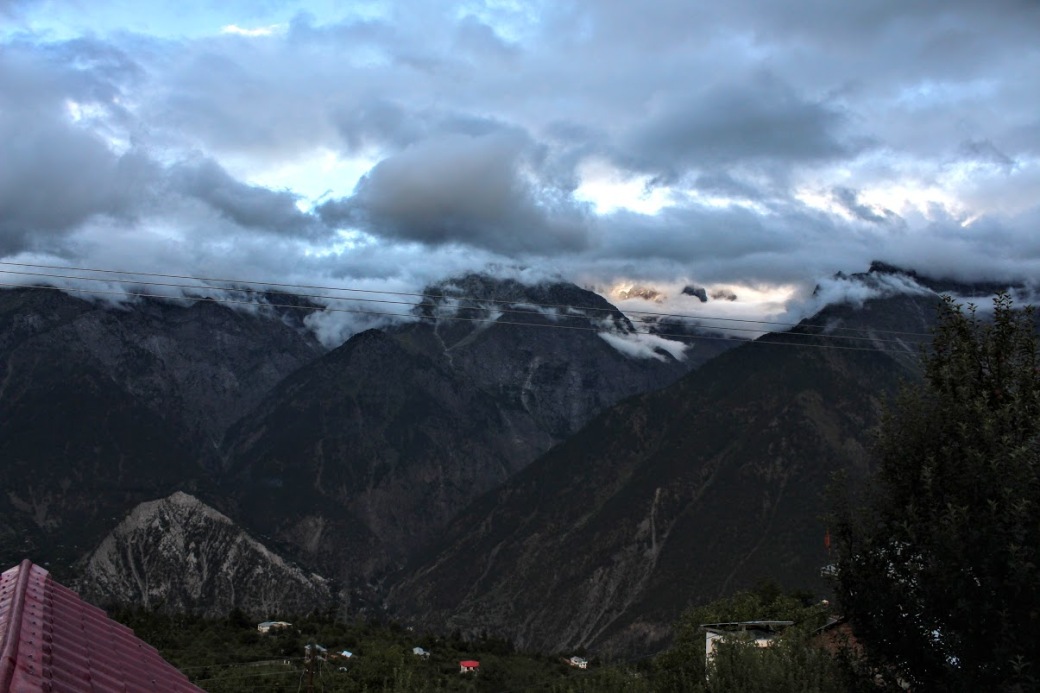 The next moments went by in a flash.I watched spellbound. The celestial light seemed to glow brighter each moment. It was a divine experience and words fail me. 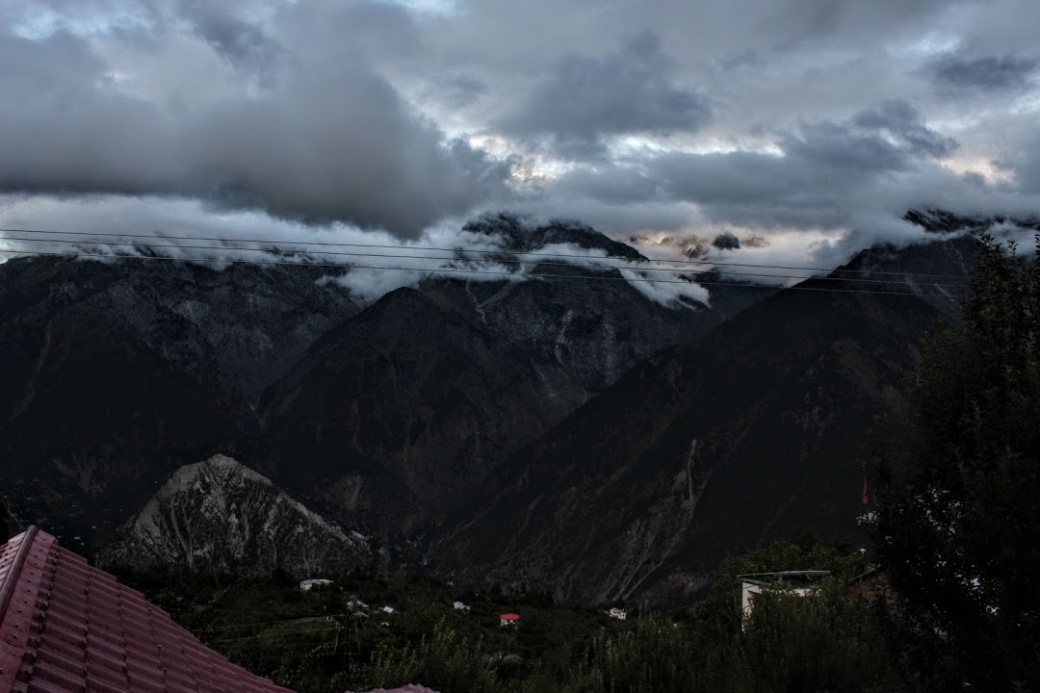 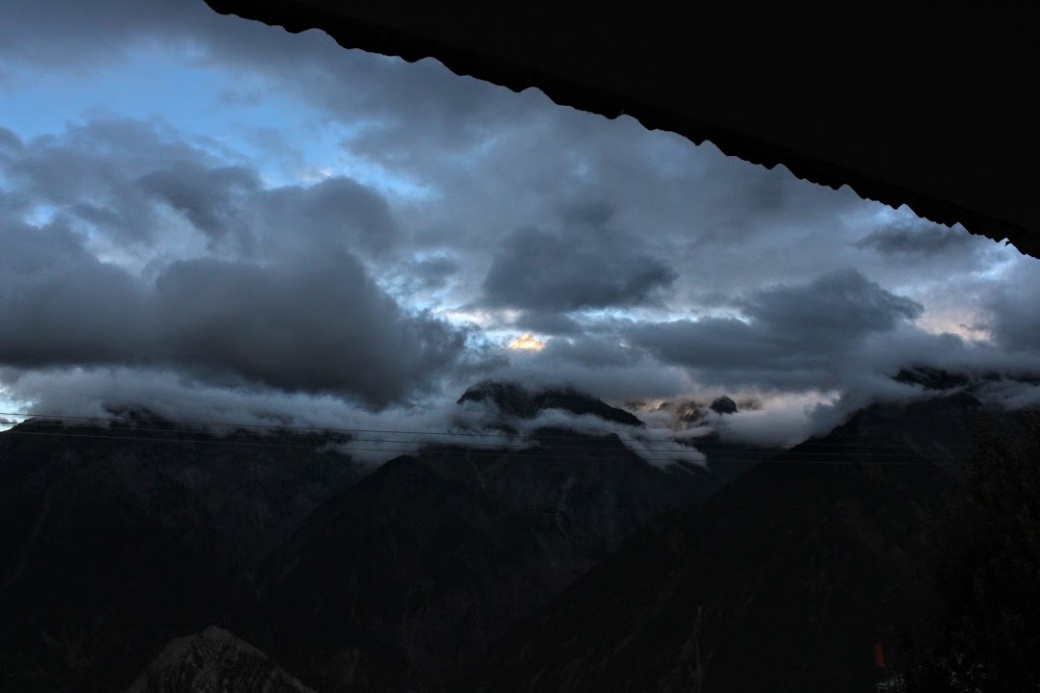 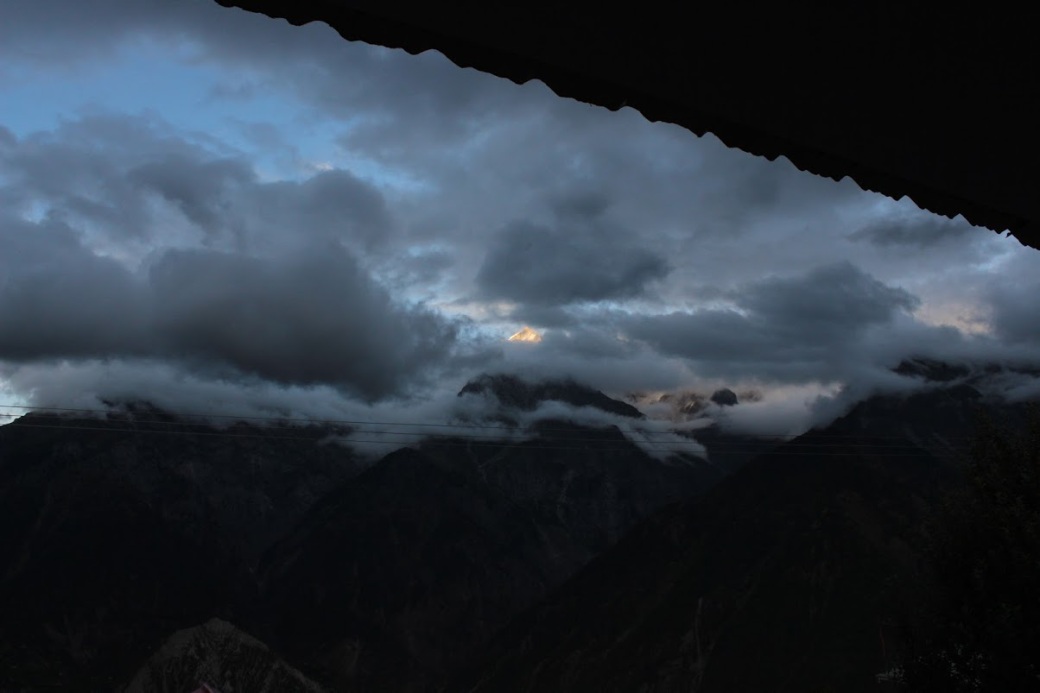 The ethereal display lasted for about 5 minutes and the clouds reclaimed their spot. 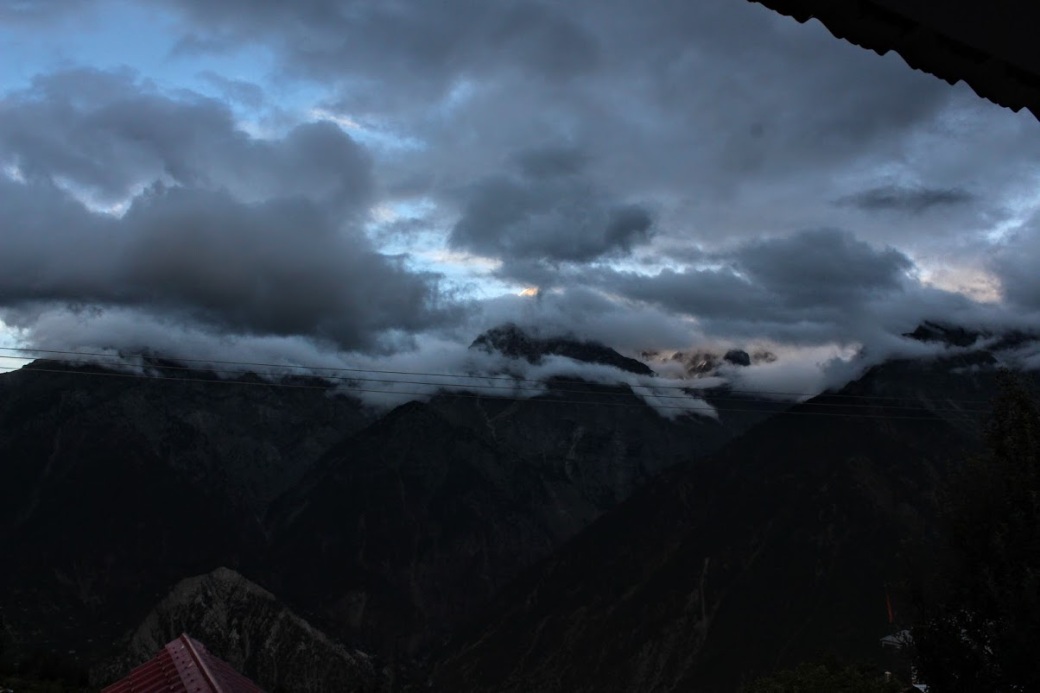 All of us were in a euphoric daze. My friend was in tears. Someone said they could see Lord Shiva atop the summit. There must be an explanation for the sun rays lighting up that peak but today I am going to believe in miracles and don’t want to be rigidly scientific.  I don’t think my pictures do it full justice. The following images are from Ajay. 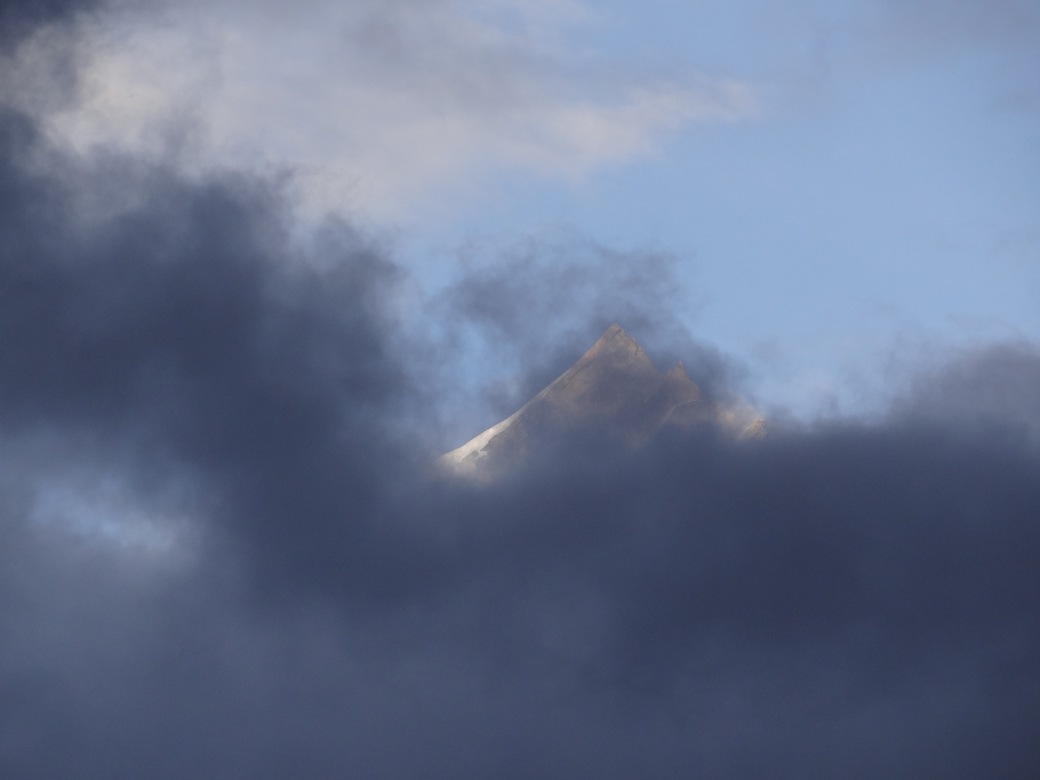 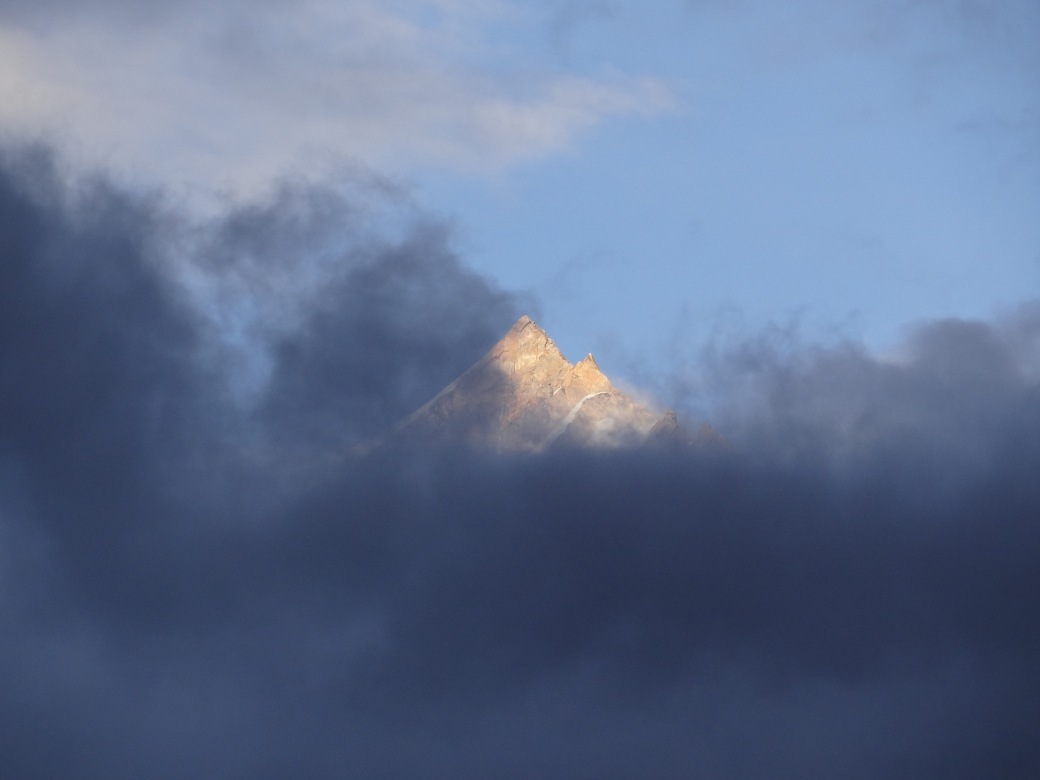 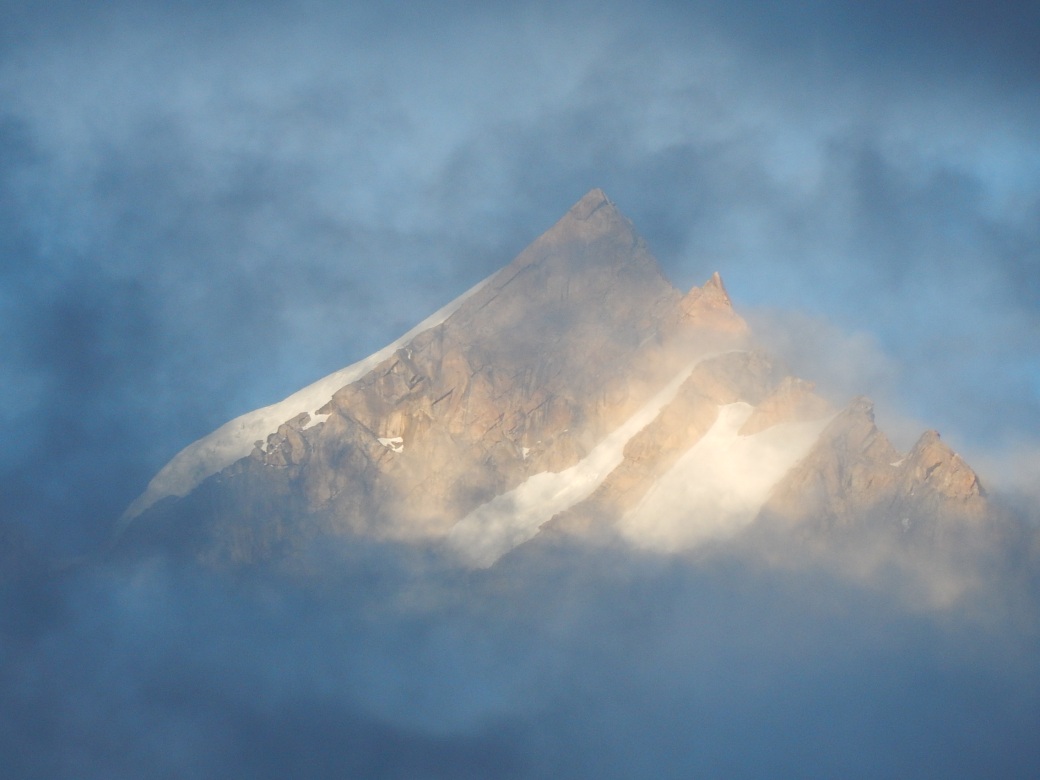 After this soul stirring experience, I could see a change in the group.  Yes, the mountain has cast a spell on us.We became more open and friendly. What a special day this has been!

The next day we were up early and lined up in the balcony hoping to see the sunrise. Alas, the mountain was unwilling to take off the fluffy cloud caps.  I guess they were playing peekaboo. 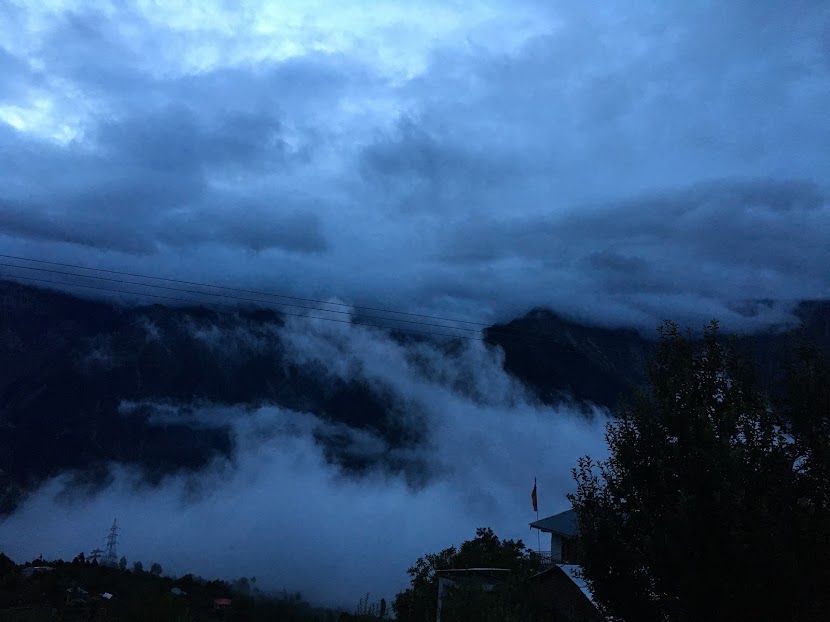 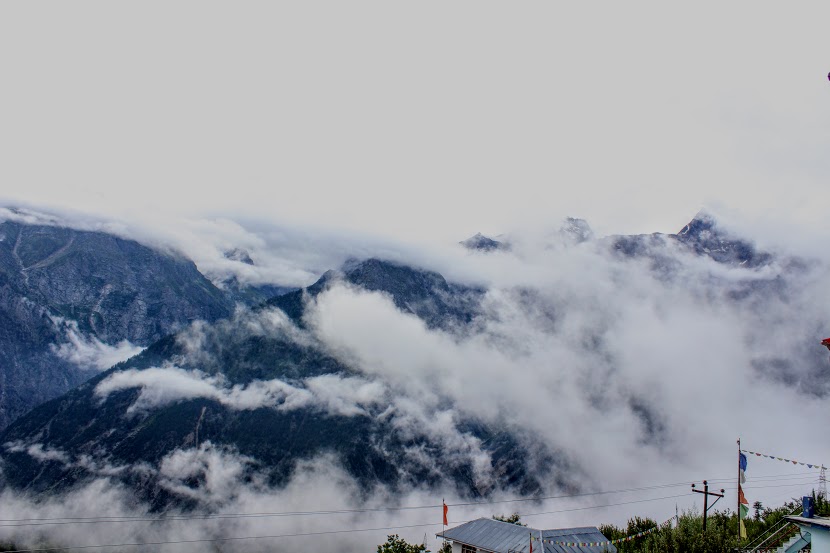 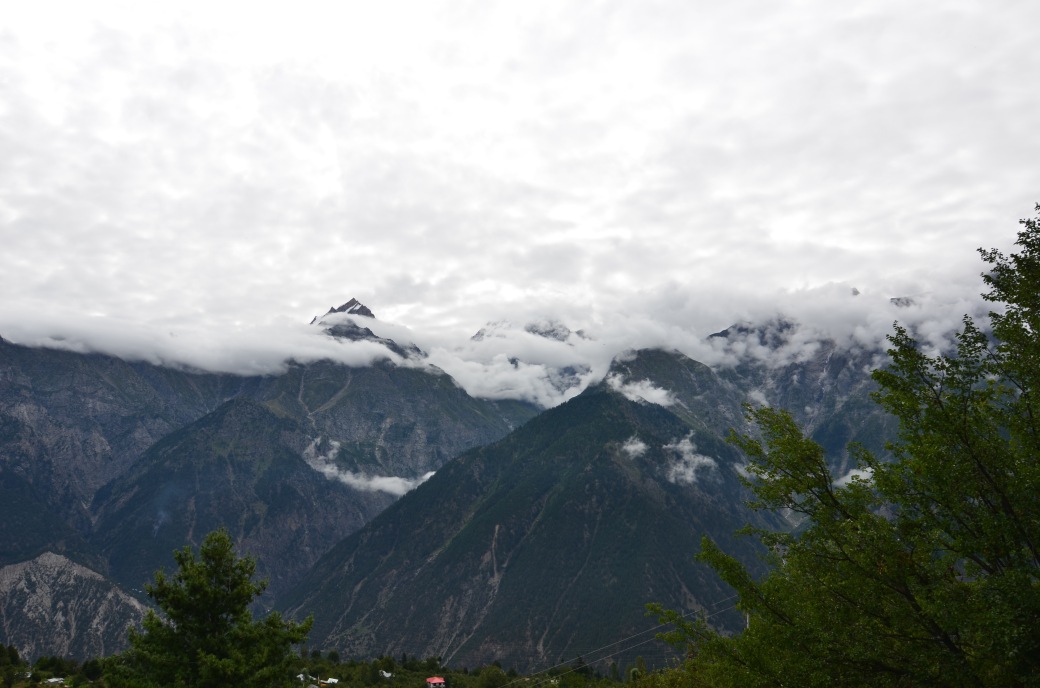 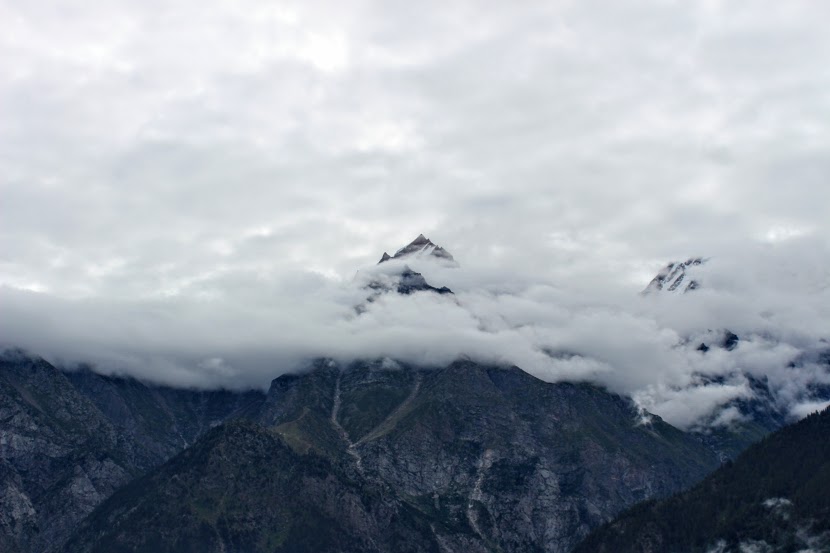 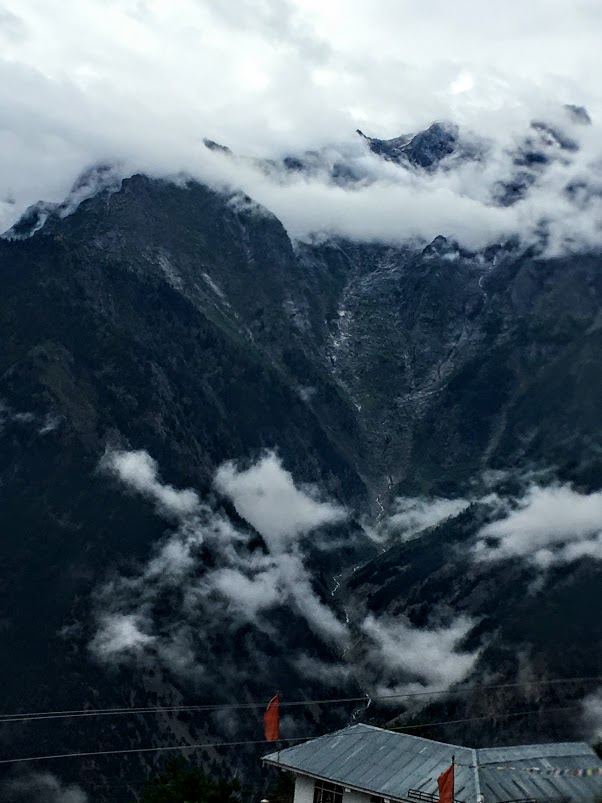 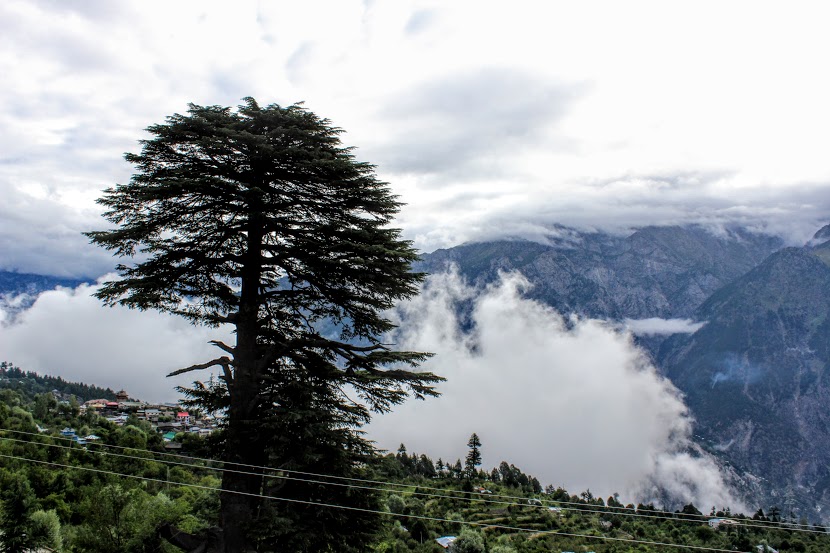 I wish we had more time to stay and watch the clouds play.  Unfortunately,  we weren’t able to spend as much time here as I would have liked.  By 9:00, we were ready to hit the road.  Spiti is getting closer. 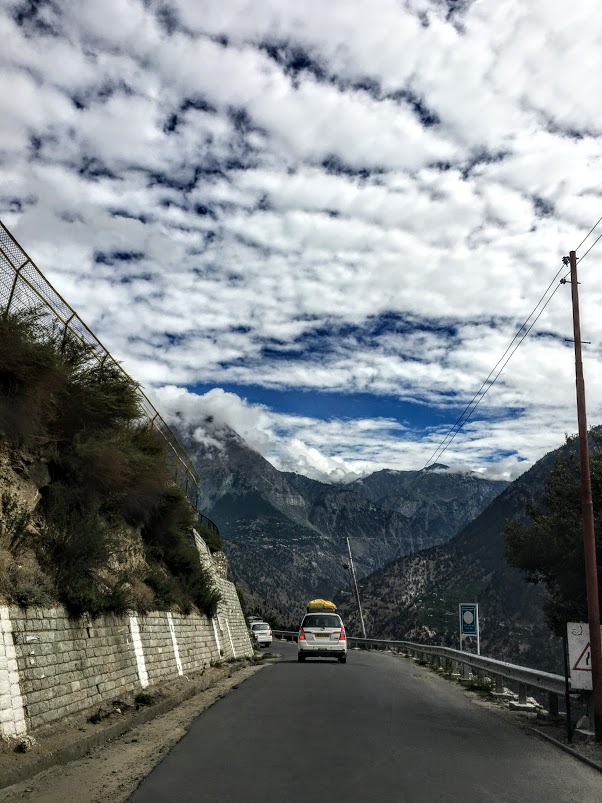 Leaving the blessed land of Kinnaur