After leaving Nako we took a detour to go to  Gui- a small village near the Chinese border. Gui gained fame in 1975 when the Indo Tibet Border Police discovered a mummy which was later found to be a Lama. Carbon dating has estimated it to be 550 years old. Since then the Mummy Lama has become a revered local deity and this place has become a regular stop for the tourists.  Each day in Spiti is turning to be different and exciting but a Himalayan Mummy was the last thing we expected to find here.

The winding road takes you to the top of a hill. The place looks isolated and barring our group, not a soul was in sight.  The grand colorful monastery looks striking against the brown mountains.

This is going to be the new shrine for the mummy. Presently he is housed in the adjacent yellow roofed room. With mounting excitement, we walked in and came face to face with the Mummy Lama.   I was expecting to see a supine figure swathed in white clothes in a tomb similar to the mummies I had seen in the Cairo Museum. The Mummy Lama is seen in the sitting posture with his chin resting on the knee in a glass case. 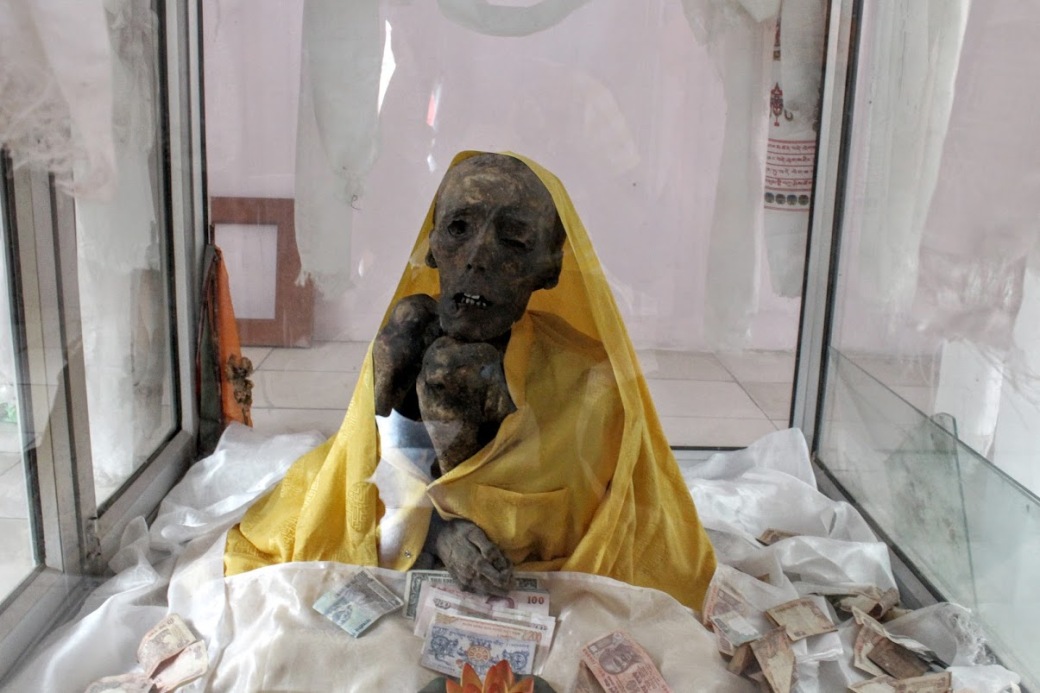 On closer look, I could make out an intact set of teeth and brittle, brownish nails. Few strands of hair are visible on the scalp. His skin looks remarkably intact. The eye sockets are empty.

No chemicals are used for the preservation and it is believed that he achieved self- mummification through deep meditation and voluntary starvation.The Buddhist ritual of self- mummification is known as Sokushinbutsu and was practiced by the monks in Japan, Thailand, and Mongolia between the 11th and 19th century.  Those who achieved the difficult task are considered Living Buddhas.

One can’t help feeling awed by the ascetic monk who took this route for the ultimate salvation. They say Gui Mummy was around 45 years old. I wonder why he chose to leave the world this way. Can he look into our souls?

The new monastery is an exquisite piece of art. Wherever he is, the mystique of Mummy  Lama will endure. 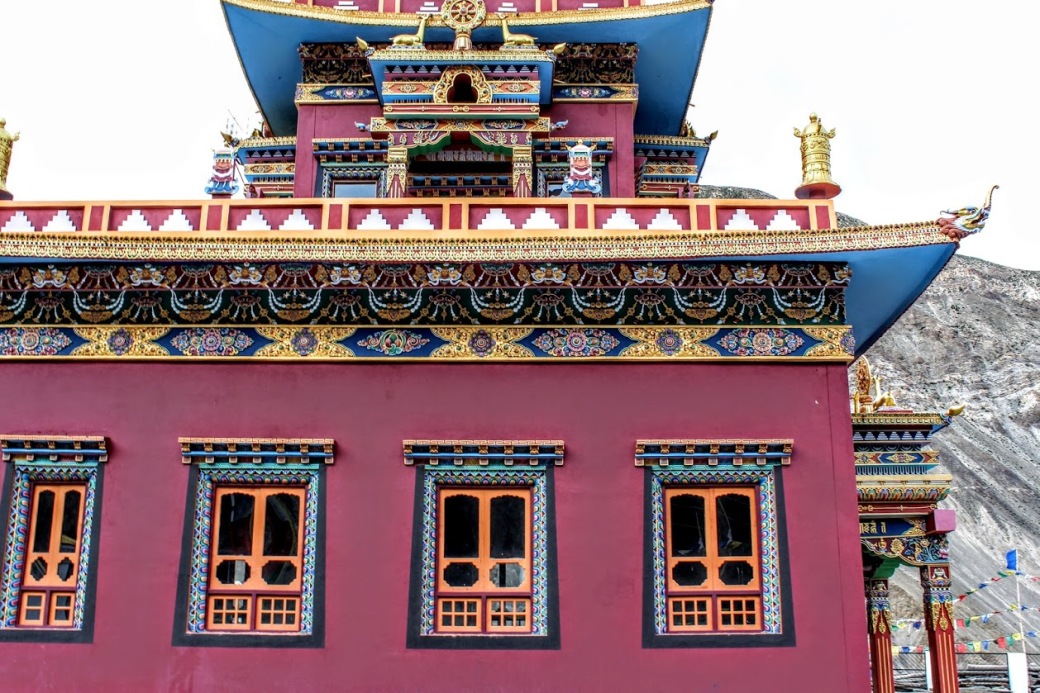 Other than the monastery and the mountains there is nothing much to see in the Giu village and we left for Tabo.  Situated at a height of 3050m,  Tabo is a major Buddhist center.  We were exhausted and some of us were getting breathless and dizzy.   Acute Mountain Sickness!  A good sleep and Diamox was what we needed.

I woke up refreshed and set out to get a feel of the place. AMS seems to have settled.   The pure cold mountain air and the pristine surroundings are highly salubrious. I will take it easy today.

Like most of the Himalayan villages, Tabo has a welcome arch,  a couple of homestays, guesthouses,  helipad, and friendly dogs.

The Tabo Monastery could be seen from far with its gleaming golden stupa and colorful flags. 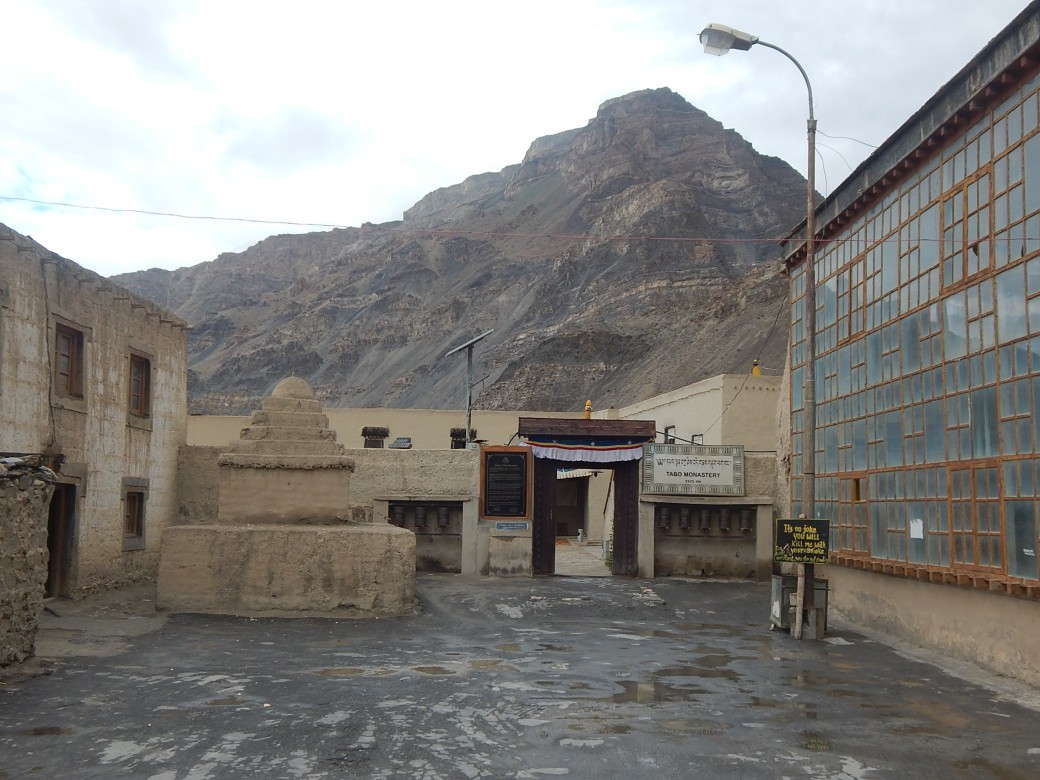 Buddhist mantra on the mountain

Once inside I felt I was in a different era. Founded in 996AD the sprawling complex is one of the oldest functioning  Himalayan monasteries and is maintained by the Archeological Survey Of India.   The misty mountains encircle a series of mud stupas.  Buddhist chants could be heard from the main prayer hall. A monk who was hurrying for the prayers told me to come back at 8:00 when the complex will open to the public. I was in no hurry and walked around the place soaking in the overwhelming serenity and silence. Time seems to stand still…….. 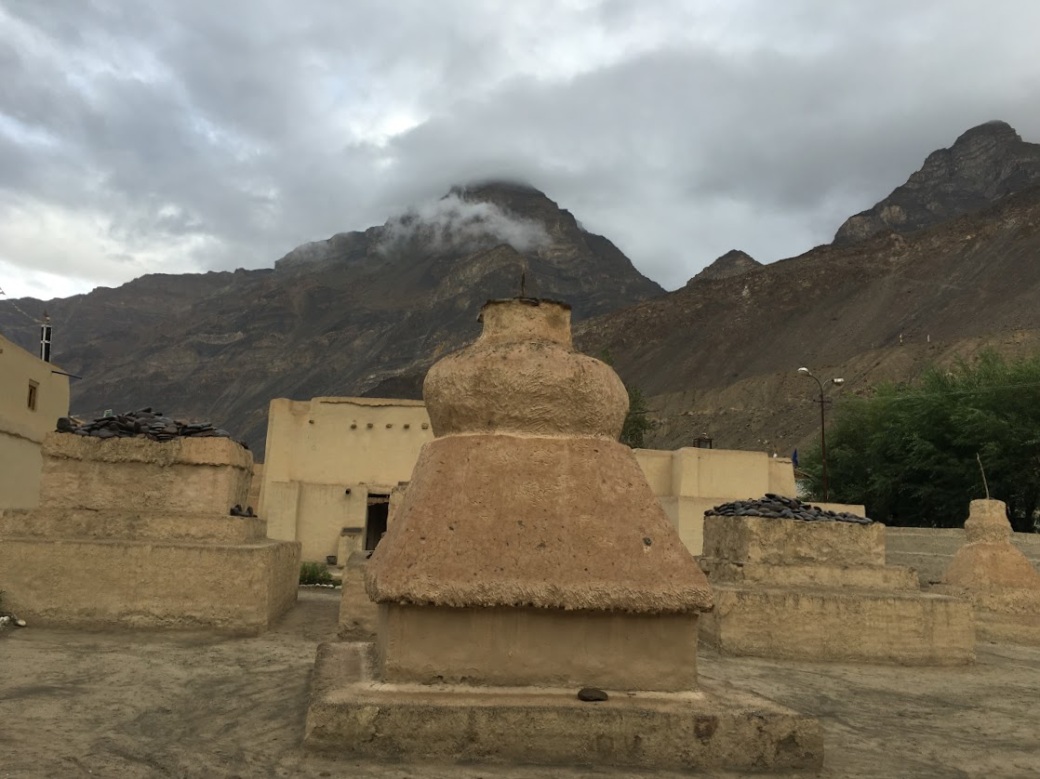 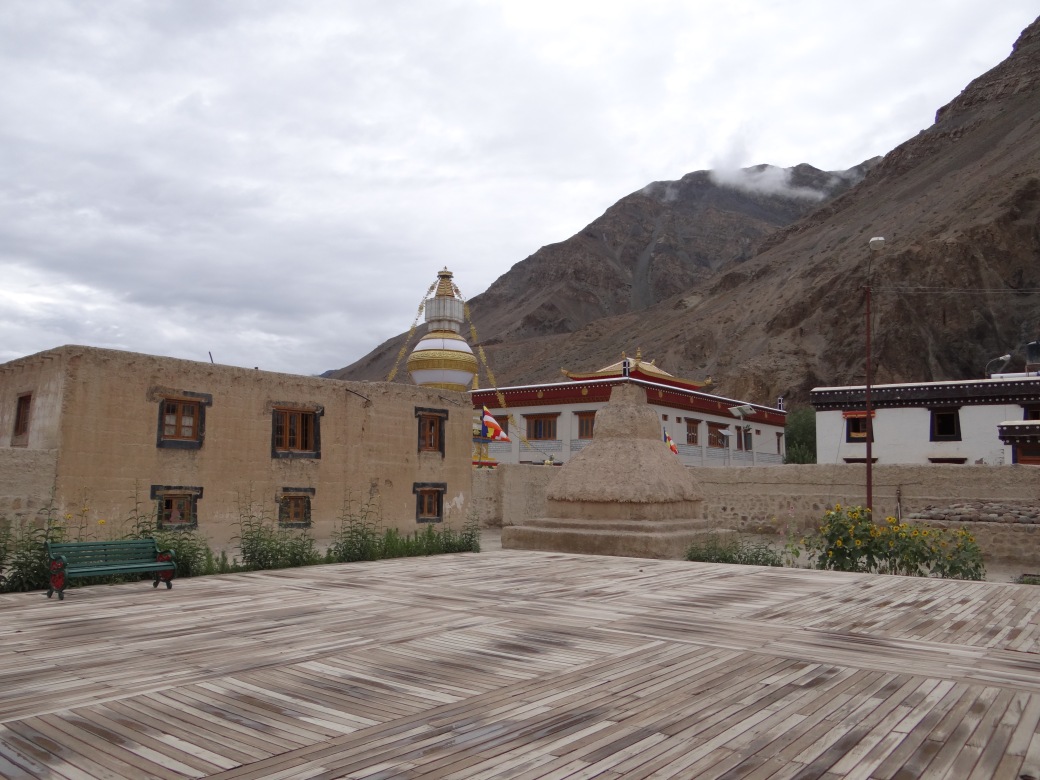 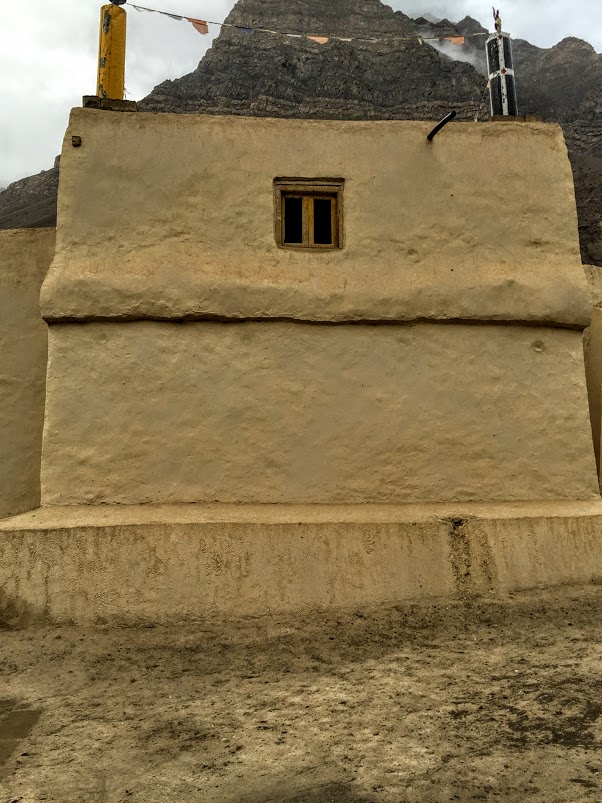 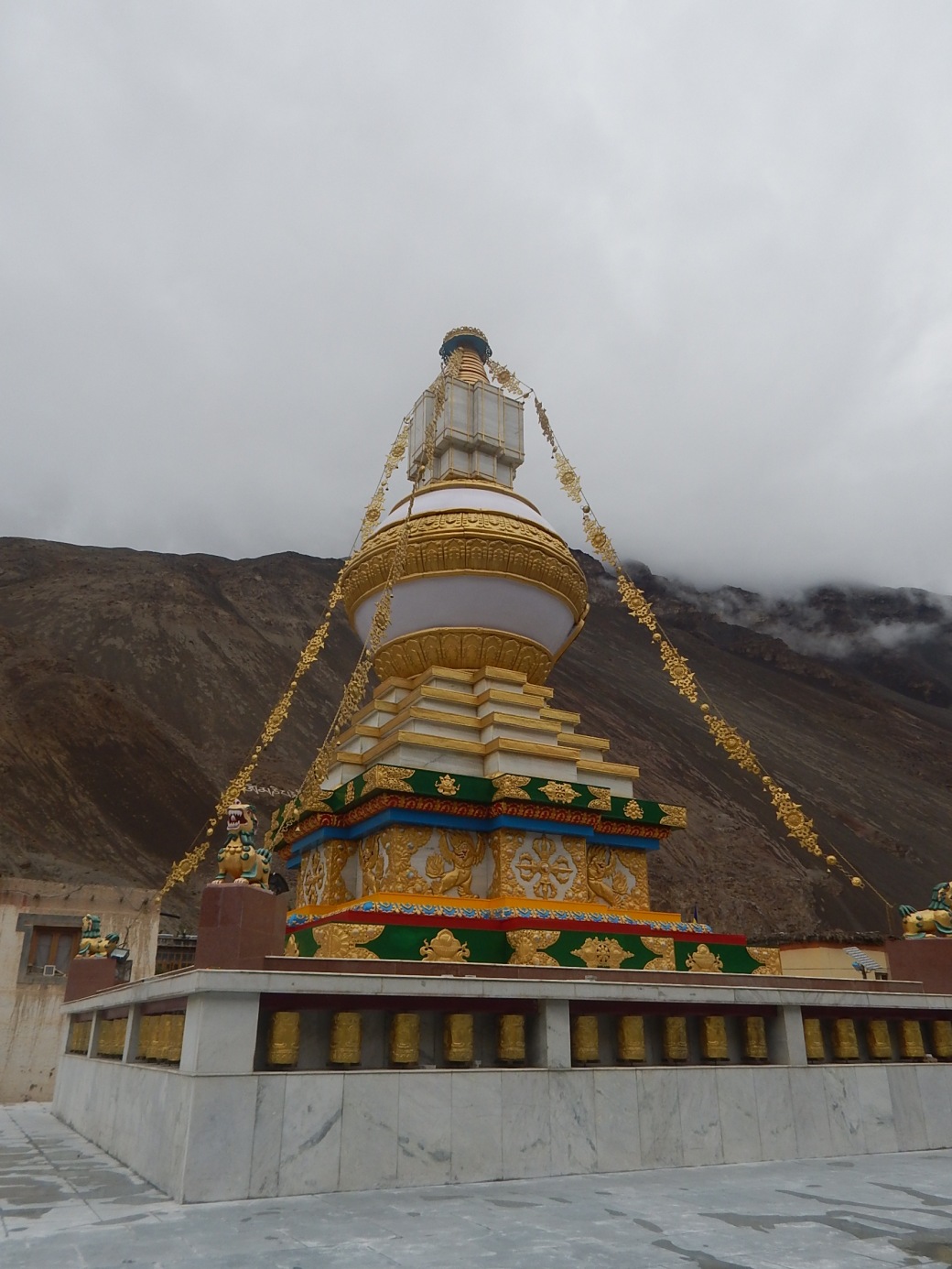 Tabo monastery is one of the most important Buddhist centers in India.  It has a wealth of ancient scriptures, murals, frescoes, and statues.  There are 9 temples,  many stupas, and monk’s quarters within the complex.  The main prayer hall is richly decorated from the floor to the ceiling with murals depicting the life of Buddha.  We had to use a torchlight to see some of the paintings. Even a layman could make out that the rich artwork is different from what we see in the other Buddhist centers.  Photography is not permitted inside to protect the precious artifacts.

Unlike most of the Himalayan monasteries which are at impossible heights atop the mountains, Tabo monastery is on flat ground ( most encouraging for the vertically challenged folks like me).  Another special feature I noticed is that the mud stupas are unadorned. As I was discussing these points with my friends, the tour in charge informed that there are some caves in the mountains above the monastery.   There is a well- defined trail which did not look daunting. I inhaled deeply and went up the path.

In search of the caves

In the olden days, the monks used these caves for meditation. 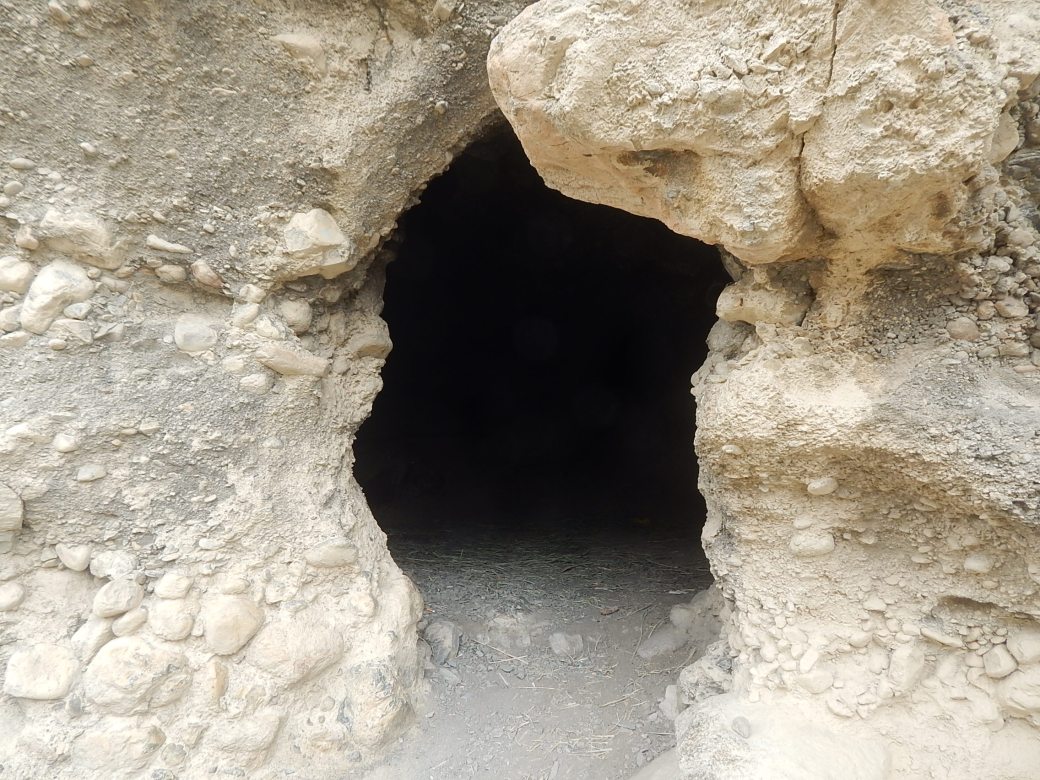 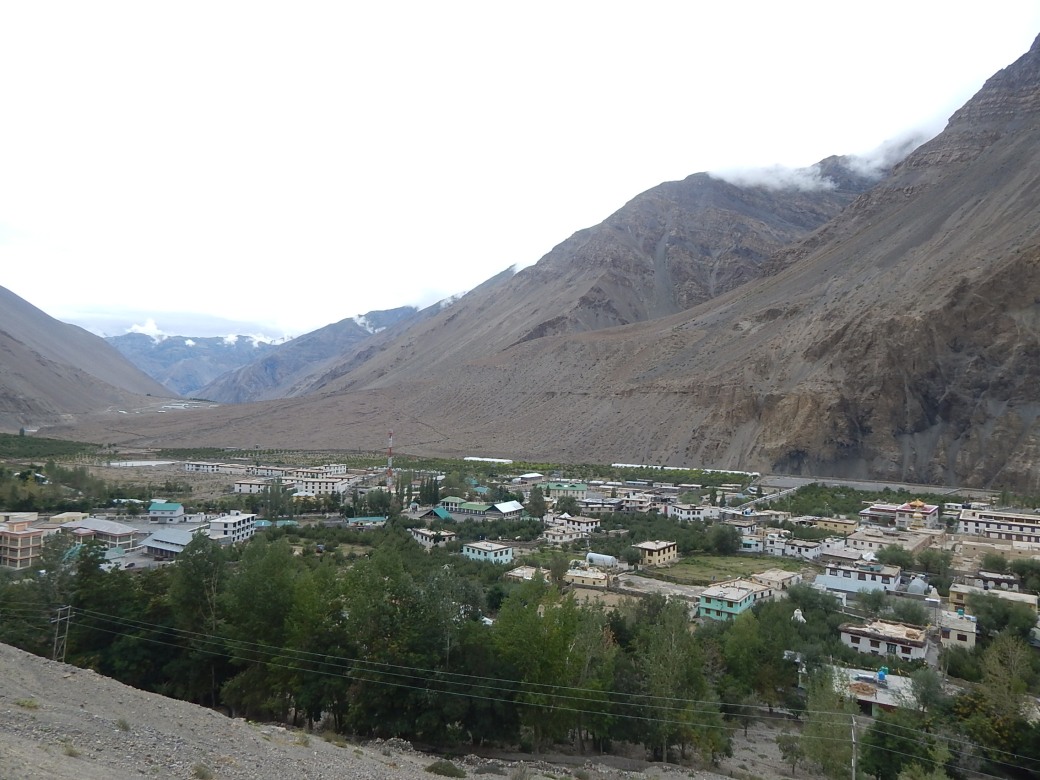 Tabo seen from the hilltop.

From lofty spiritual heights, I was brought back to the present by a group of boisterous nursery kids. They were making the most of the midday break.  I was delighted to see Smt.Angmo Memorial Little Star School in this remote area. So what if the classroom is small, they do have midday meals, a small play area and the kids look happy.

27 thoughts on “Spiti Tales- Tabo Monastery and The Mummy Lama.”