” Delusions of grandeur!   Are you coming from a movie set?”   the friend was not convinced until I showed her the photos of Chettinad (land of Chettiyar).

Chettiyars, one of the richest communities in South India made their fortunes from banking and trading during the British Raj. They also established flourishing business ventures in South East Asian countries. In their heydays, they made palatial houses across  75 villages near Madhurai, Tamil Nadu.   This region came to be known as Chettinad. After independence,  declining economy forced many of them to move to the cities and other countries leaving their ancestral homes in the custody of caretakers. Many of the grand old mansions are now in a depressing state of disrepair; some are stripped off the valuables and demolished;  a couple of them are converted into heritage hotels.  Some houses are open to the public.

Our heritage trail started from  Karaikudi-the main town. The local driver Anand was an enthusiastic and enterprising guide. After a short visit to a temple, (there are a lot of temples around)   he brought us to Periya Veedu(Big House). 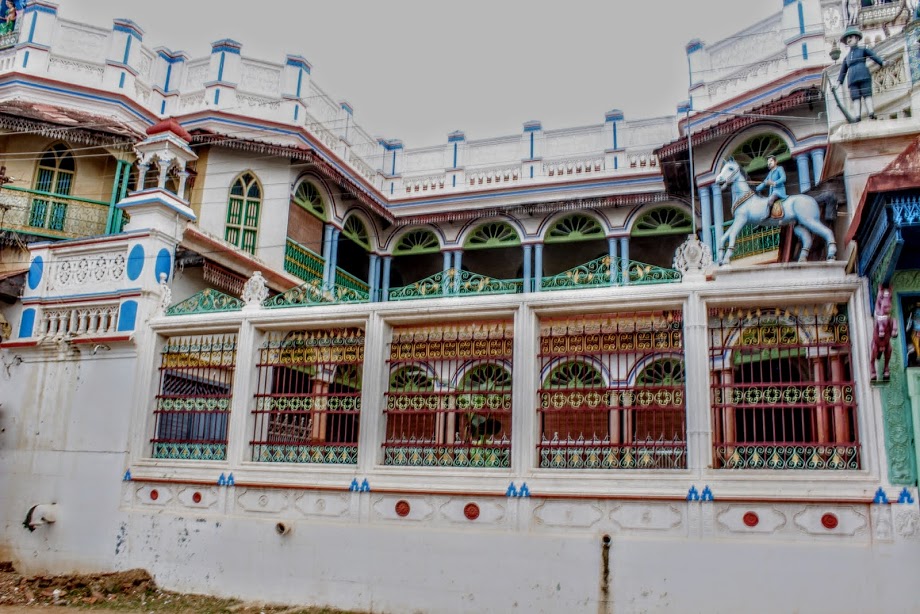 An old caretaker let us in for a nominal charge.   We stood at the foyer and took in the  visual feast.    Chettiyar houses follow a typical pattern: imposing entrance with arches,   huge courtyards,  granite and wood pillars, high ceilings, and they are aligned in such a way that from the entrance one can see right up to the back door. Some houses stretch along an entire street. The size and scale of ornamentation reflect their wealth and prestige.

The reception area mugappu has raised platform thinnai on either side ; this part was used for the male guests. There was a clear demarcation between the public and private zones. With men away on business for long periods,  women were in charge of running the house. I wonder if the dynamics changed after they returned home for good! 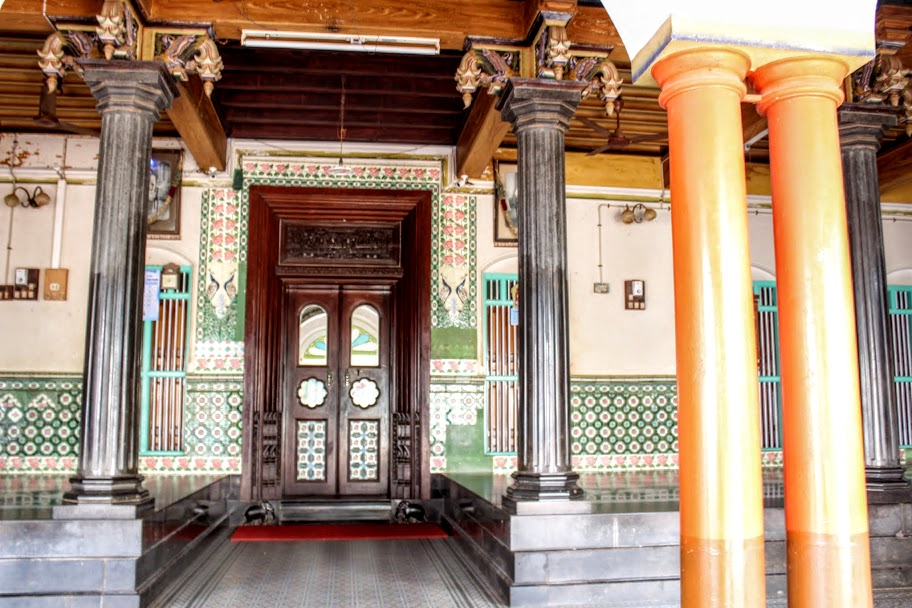 The ornate teak doors open to the main hall. It was like looking through a kaleidoscope and finding colorful surprises at every turn. 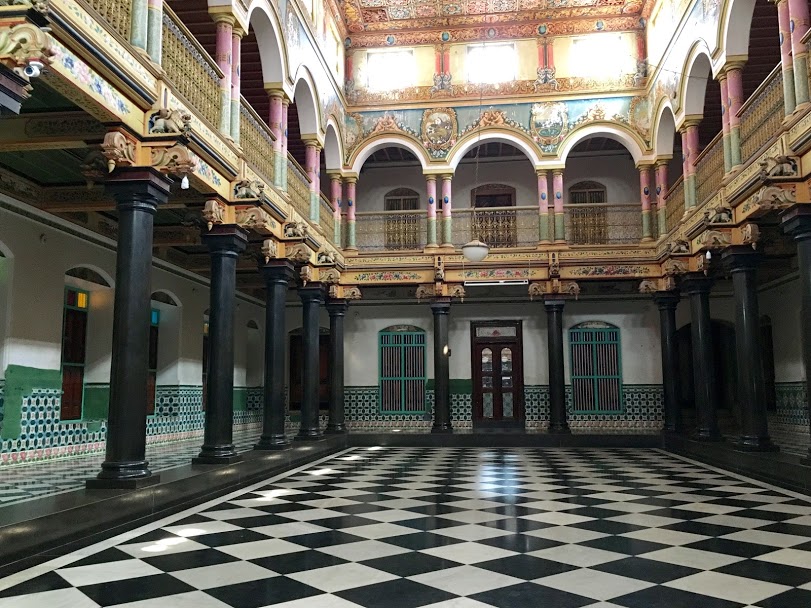 The influence of different lands and cultures is visible all around: Belgian mirrors(kept covered), Italian marble, Burmese teak pillars blend beautifully with the locally made Athangudi tiles.   Anand informed that this hall can accommodate thousands of people and was used for banquets, weddings, and festivals. It was interesting to know local masons were the chief architects for these “hybrid” homes. 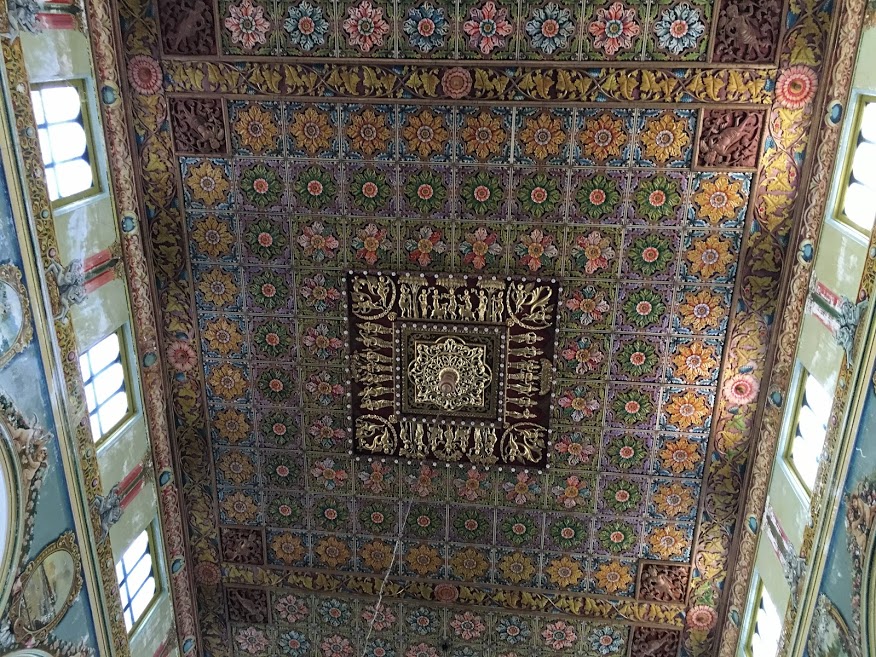 Lord Krishna on the ceiling 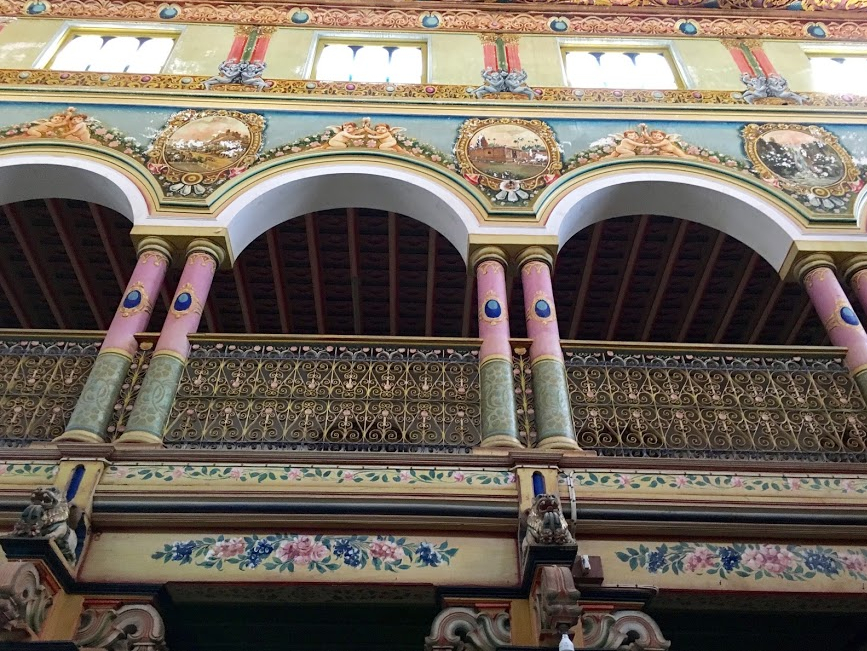 The windows and doors have a special charm: 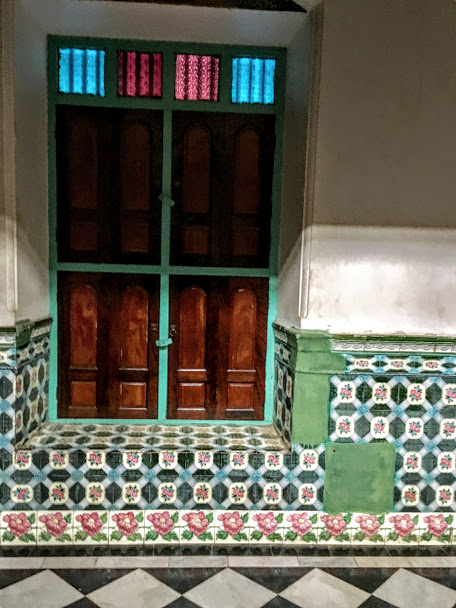 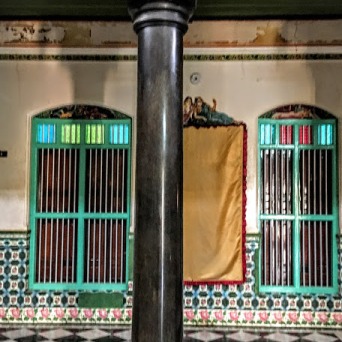 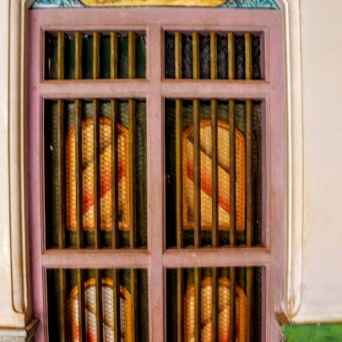 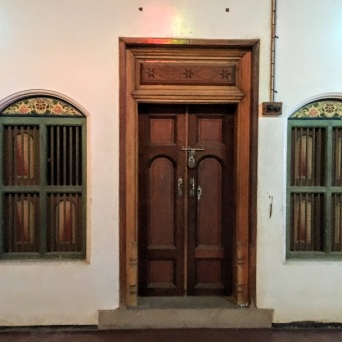 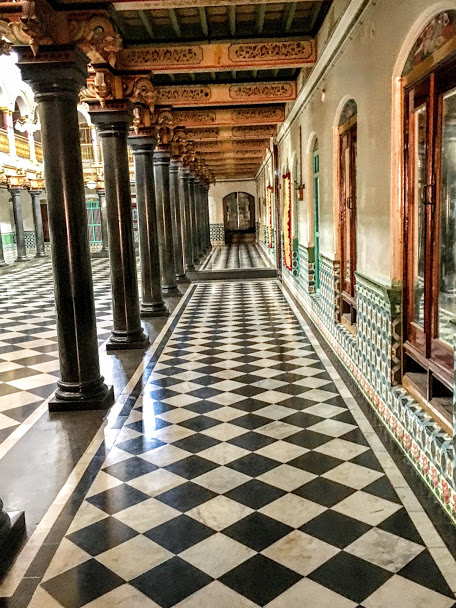 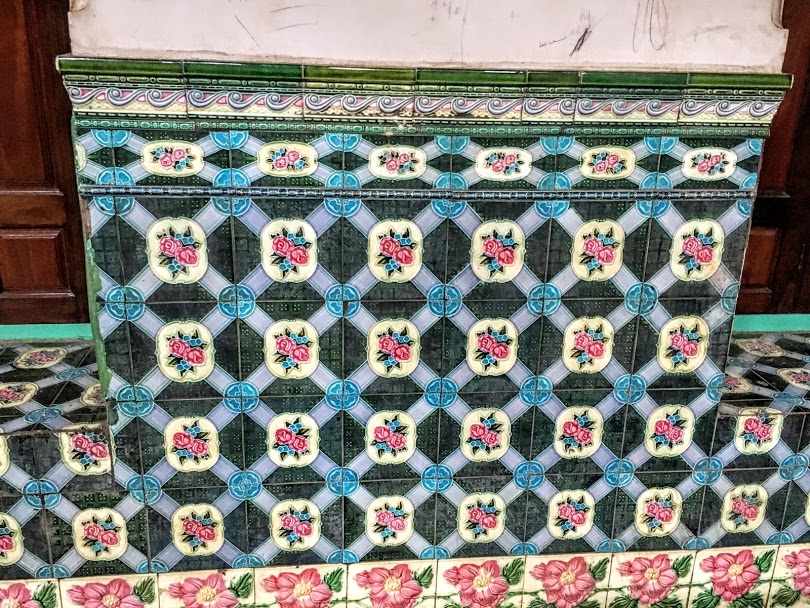 From the main hall, we moved to an open courtyard with large verandas and several rooms : 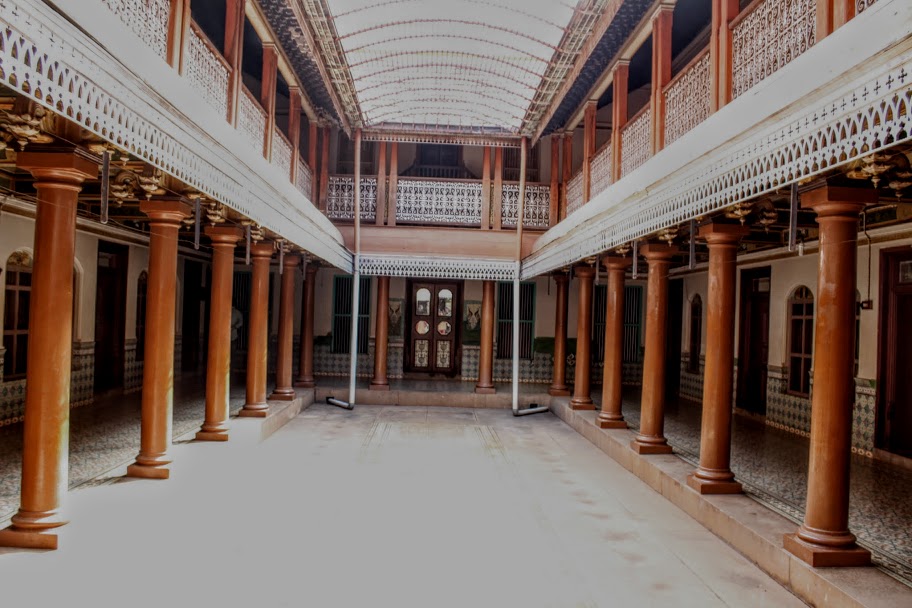 The ladies’domain does not have the lavish ornamentation of the main hall but is more bright, airy, and personal. Many South Indian movies are shot in this house. Anand reeled off the names and I made a note to watch it on YouTube.

Next comes the dining hall which looks like the interior of a church: 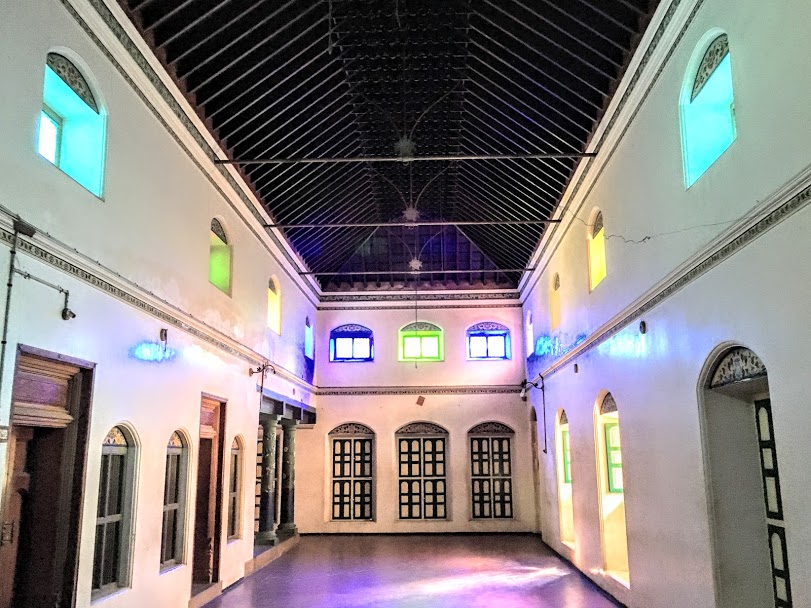 Only three sections of the house are open to visitors.  All the other rooms (40-50) are locked up. The family members come only for a wedding or other festivals. It must cost a fortune to maintain such a house! Out of the 50-60,000 houses, there are now only 10-15,000 (estimates vary widely) and they are scattered around Karaikudi, Kanadukathan , and Puthukottai. It seems the Chettiyars vied with one another in making bigger and grander homes.

We ambled down the deserted road marveling at the architectural splendours: 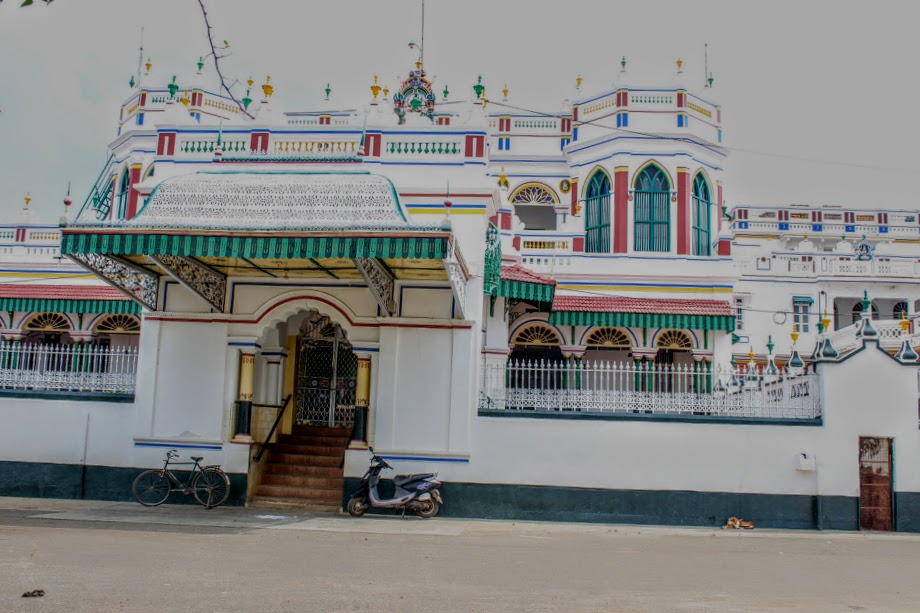 Majestic Raja’s Palace was not open to visitors 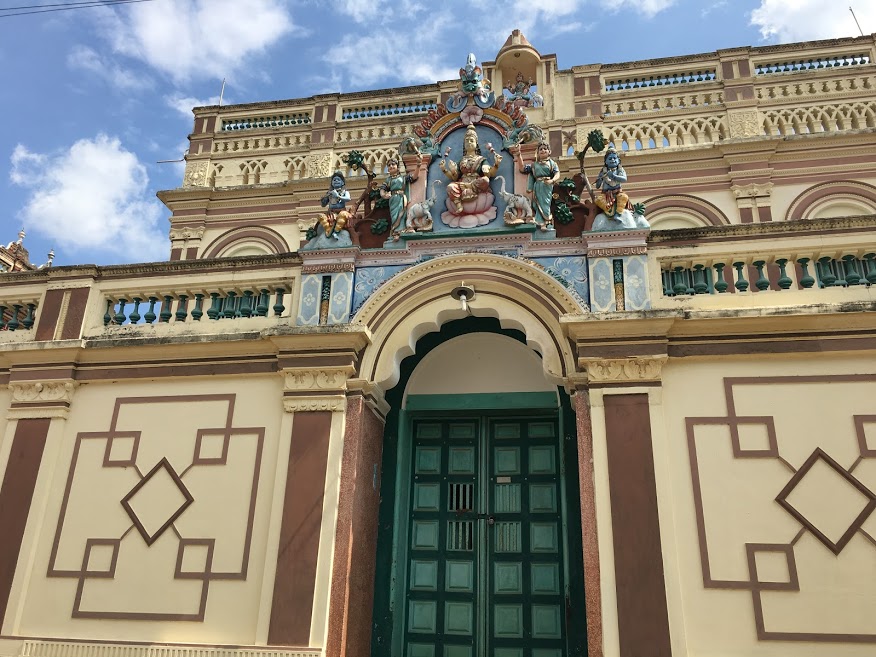 Stucco figure of Goddess Lakshmi,goddess of wealth and prosperity is seen in many houses. 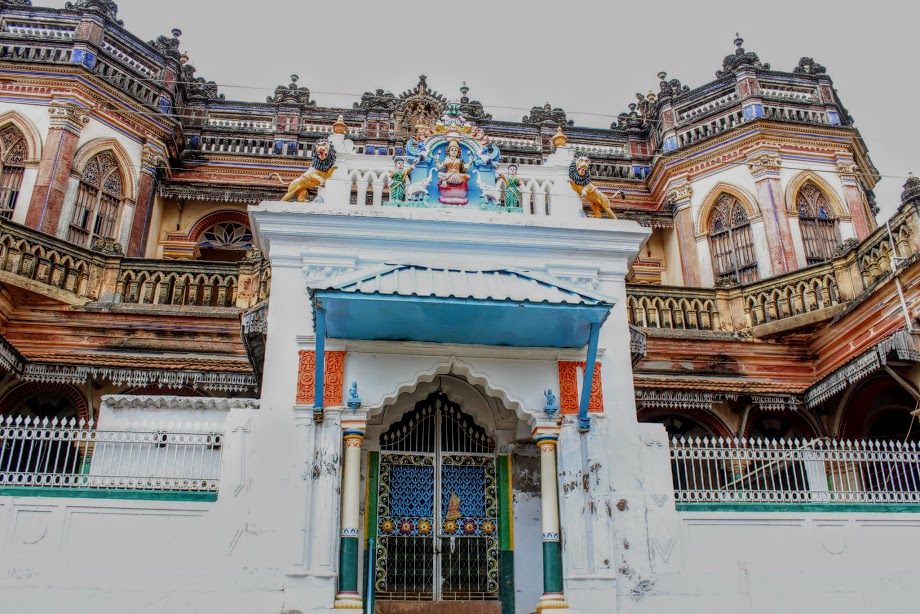 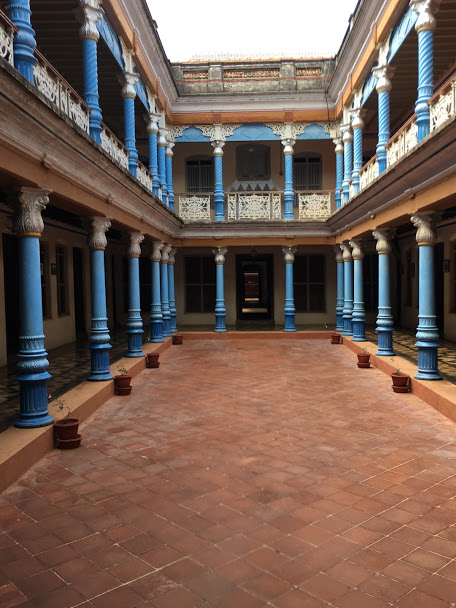 Central courtyard in a mansion-this is my favourite spot. 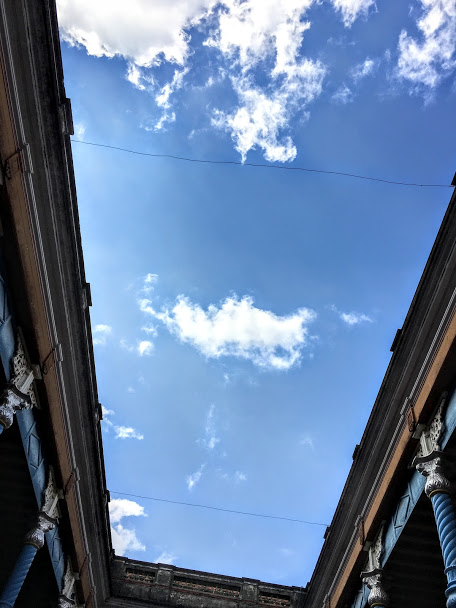 Open to the elements 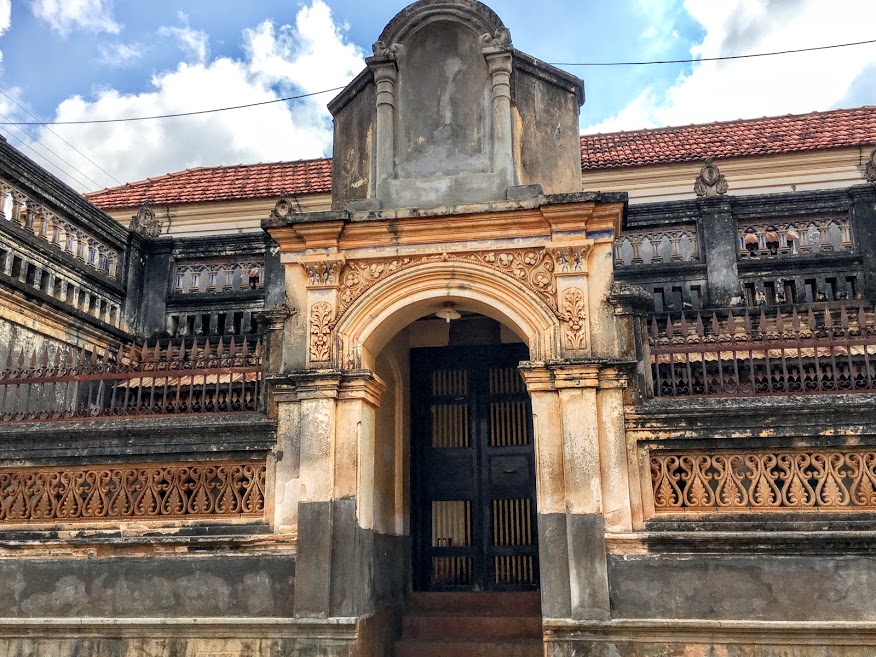 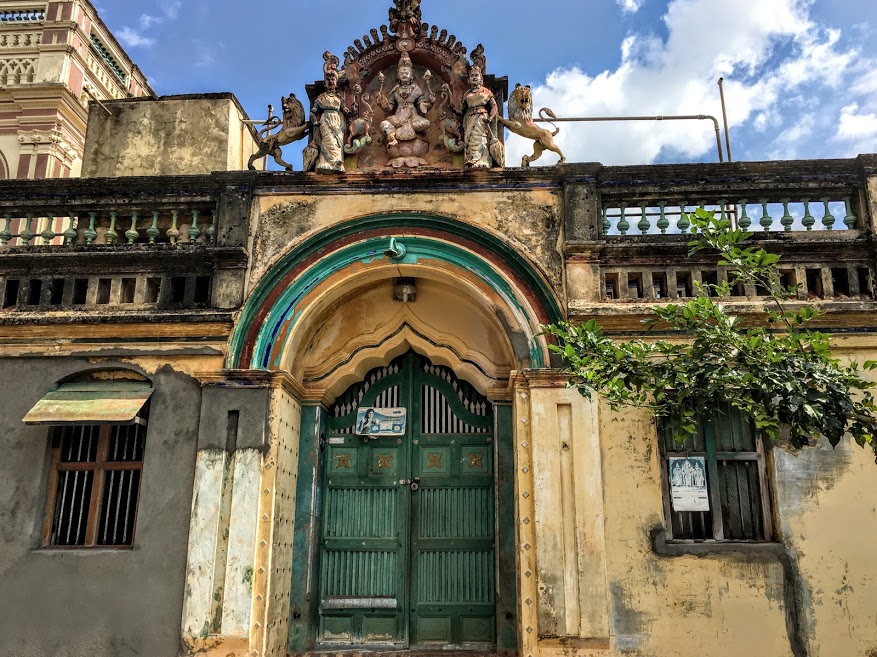 Frozen in a time warp 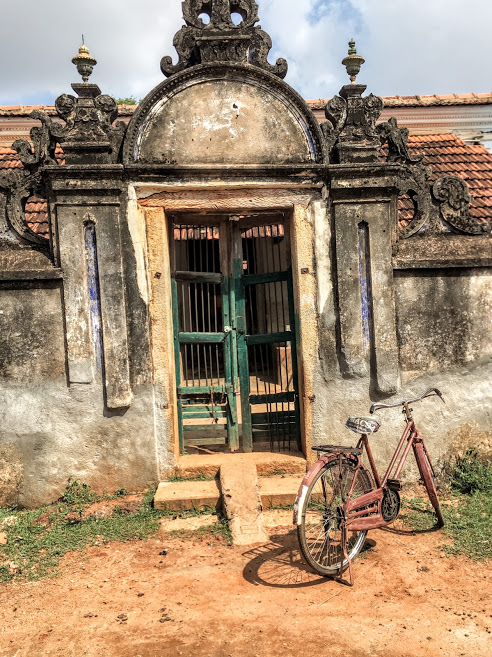 Another repository of memories 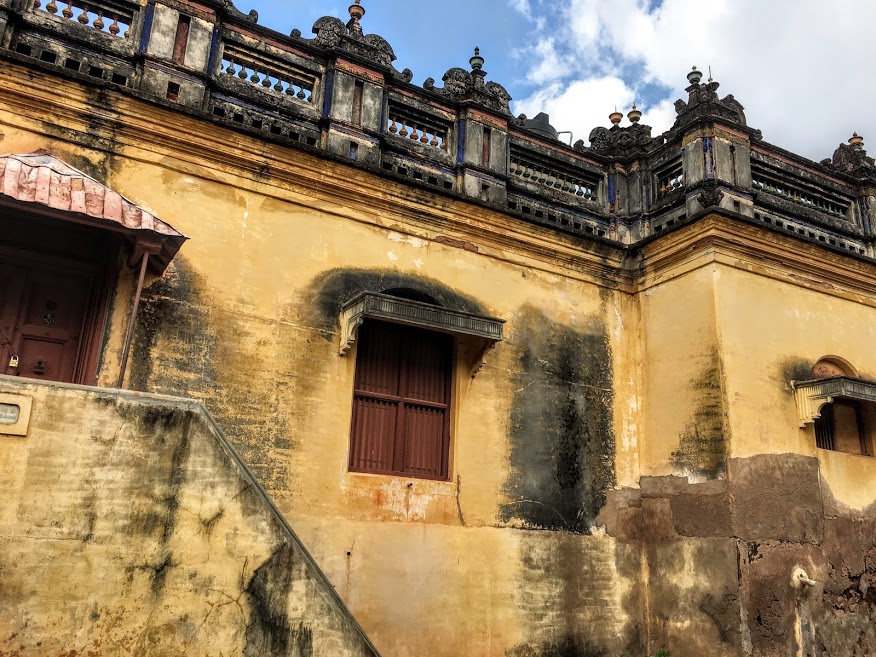 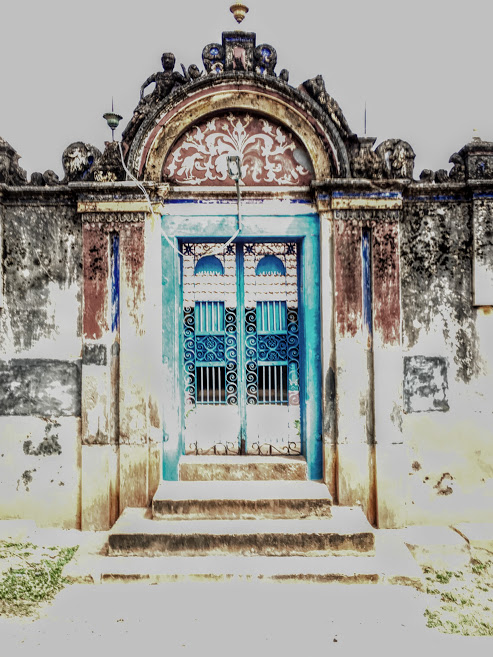 After the heavy dose of history and art (I was getting a bit disoriented), it was time to visit the local market. The lively place was full of people and produce: fresh and seasonal. It was fun watching the buyers, sellers, and the range of items on display. 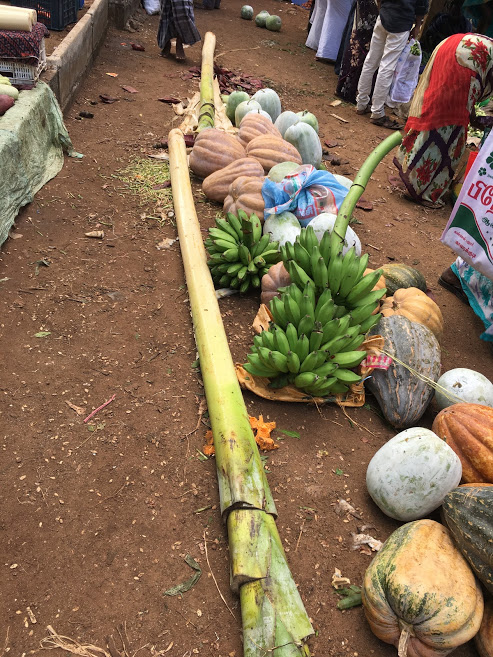 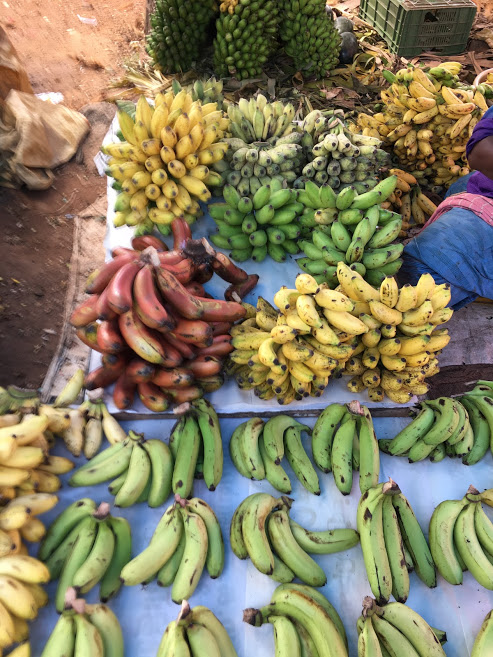 We went around buying as much as we could eat and returned to the hotel.

26 thoughts on “Once Upon a Time in Chettinad”