In Tbilisi many monuments and churches are lit up at night and this offers a glorious sight.From the window  I could spot this  mammoth structure bathed in golden light   and it can be seen from most parts of  Tbilisi.This is the Tsminda Sameba Cathedral-main cathedral of the Georgian Church and third tallest orthodox church in the world (first two are in Russia)  measuring  98 metres.Also the most recent addition to this land of churches .It was  consecrated in 2004. 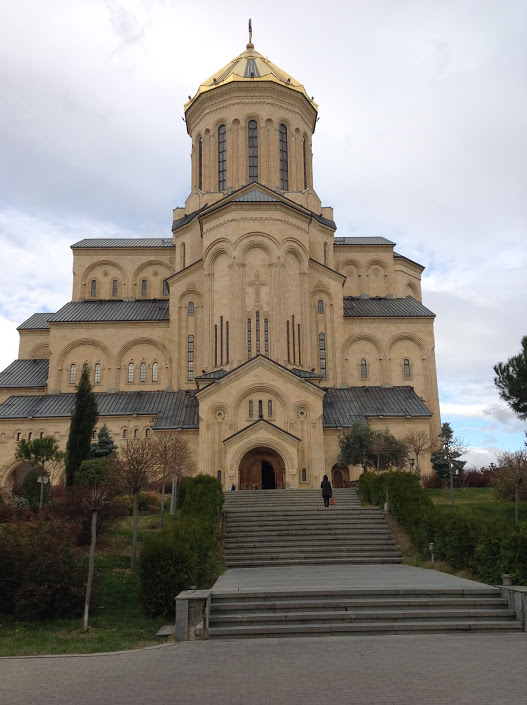 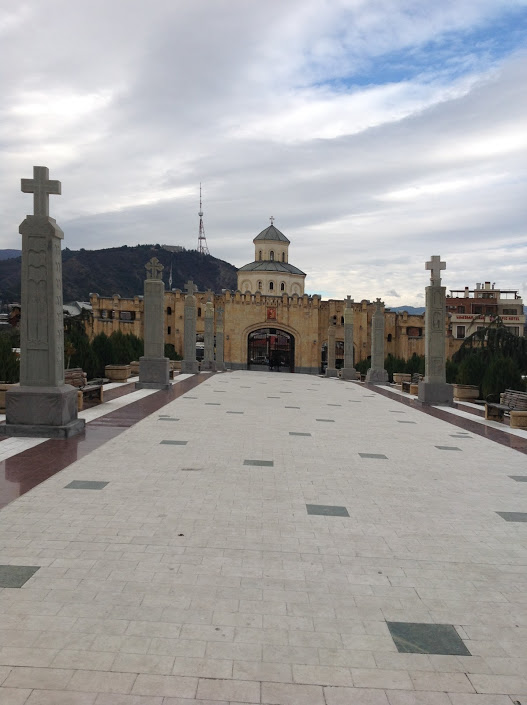 There are nine chapels within the cathedral.I felt like a lilliput   seeing the towering structure.Once inside it was again calming and serene.I get this feeling  whenever I am in  a church .Quite a contrast from the noisy temples especially the popular ones.I would rather go to a small temple  than spend hours among millions jostling to get inside and get  pushed out in no time. 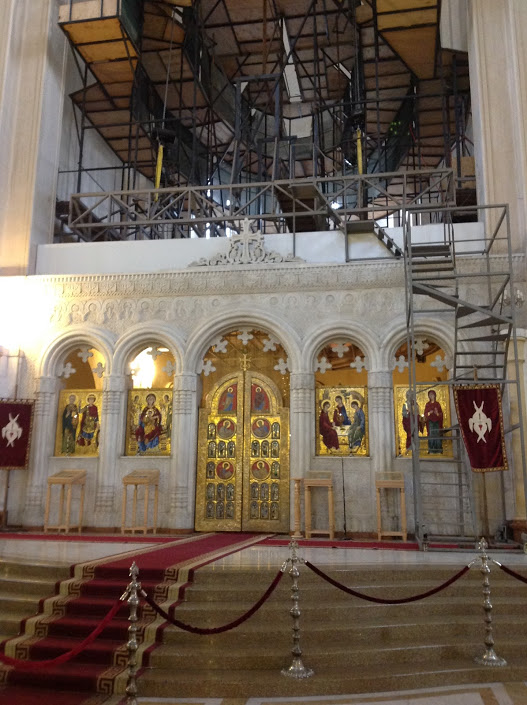 There is a nice garden  around the cathedral. 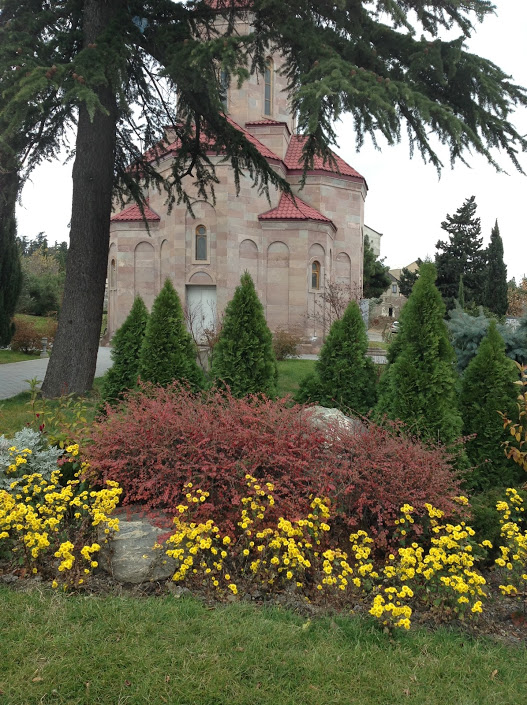 That night I was again at the window taking in the golden glow.It looked as if the dome was on fire.

This is one place I want to come back .

From the 6th century Jvari monastery we made our way to the 11th century Svetitiskhoveli Cathedral-very  difficult to pronounce and meaning  Life giving pillar.Our airbnb host Teolina and her friends George  and Irakli accompanied us.This is the second largest church in Georgia and is a  symbolic copy of the Holy Sepulchre in Jerusalem .This is also supposed to be the place where Christ’s mantle is kept  .My knowledge of christanity is very limited  and I wish I had done some  research.

There is a narrow street leading to the site dotted with souvenir shops,fancy restaurants, vegetable vendors and pretty houses.

There is a fort  surrounding the church. 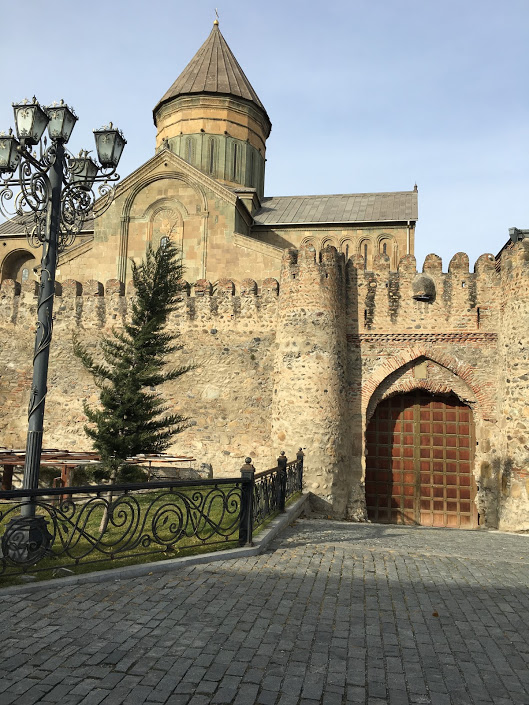 Though it was  a sunday the church  was not crowded.It has impressive frescoes,tombs and icons.The cathedral was the site of coronation  of the Georgian kings and also was their burial site.Only three tombs have been found so far.I could see a few ladies praying in front of the altar .I did not see pews in any of the churches in Georgia.The serene and silent atmosphere was overpowering. 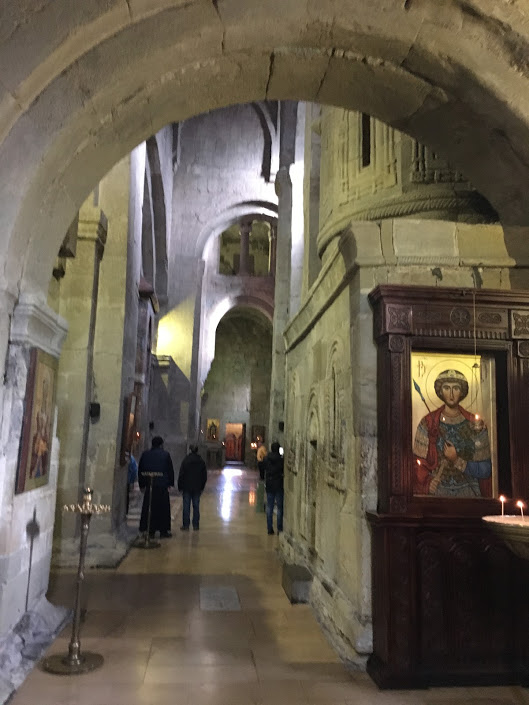 Teolina  took me aside saying that she has something interesting to show and she asked me to look up at the  external wall.After much squinting I could see a hand with a chisel and that  is supposed to symbolise the unfortunate architect Arsukidze .The story goes like this-a priest who was the teacher and patron of the architect was  so jealous of his success that he influnced the King  to have his right arm chopped off. 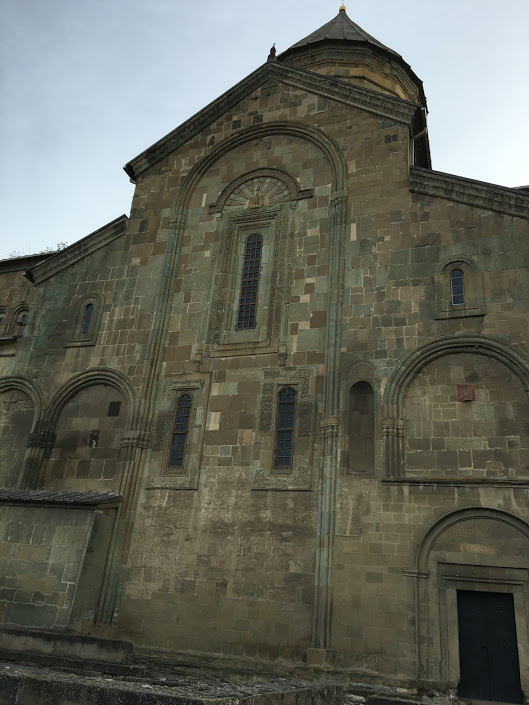 There are four UNESCO heritage sites in Georgia and  we  had the chance to visit  the  Holy Cross Monastery of Jvari and Svetitskhoveli Cathedral included in the hisorical monuments of Mtskheta.Mtskheta was the old capital of Georgia and it was from this  place that Christanity was  adopted as the state religion of Georgia.

Jvari Monastery was the first stop.It is about 20 km from Tbilisi and is on top of Mount Armazi.

According to legend Saint Nino   who brought  christanity to Georgia   erected a  wooden cross at this site and a church was built  over the remnants in c .545.

The entrance to the monastery

From the top we can see the confluence of  Aragvi and Mtkvari rivers.

I had  a feeling of deja vu.This is the  confluence of indus and zanskar rivers at Nimmu in Leh I had seen two years back.

It was a cold windy day and we  could not stay long outside.Inside the church there were few worshippers..We also lit candles  and   stood in reverence .

Though the church looks well preserved it is facing damage from the  rains and strong winds and is  on the 100  Most Endangered Sites List of the World Monument Fund.

This monastery does not have impressive frescoes or statues like  most of the churches we saw in Tbilisi but it has its own simple charm.

Soon it was time to leave St.Nino  and go to the  first orthodox church  in Georgia. 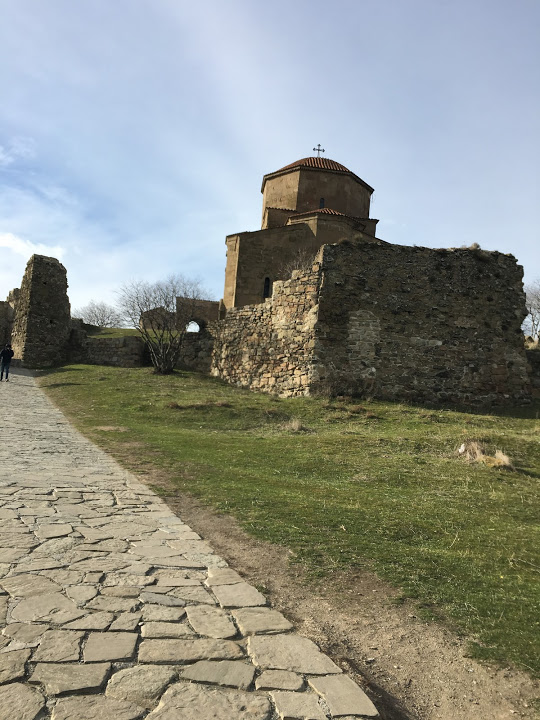 I was very happy with the location of  our  apartment in the old part of the city.This area has an interesting mix of crumbling old buildings with  high doors,open balconies,courtyards,cobblestone streets ,bakeries and churches. There are churches at almost every corner .One can see smartly dressed  people   setting out for their  daily chores and school children  waiting for their school bus.You may get lost in the  labyrinthine alleyways  but I was not a bit concerned .Mother of Georgia could be seen from everywhere and she guided me . 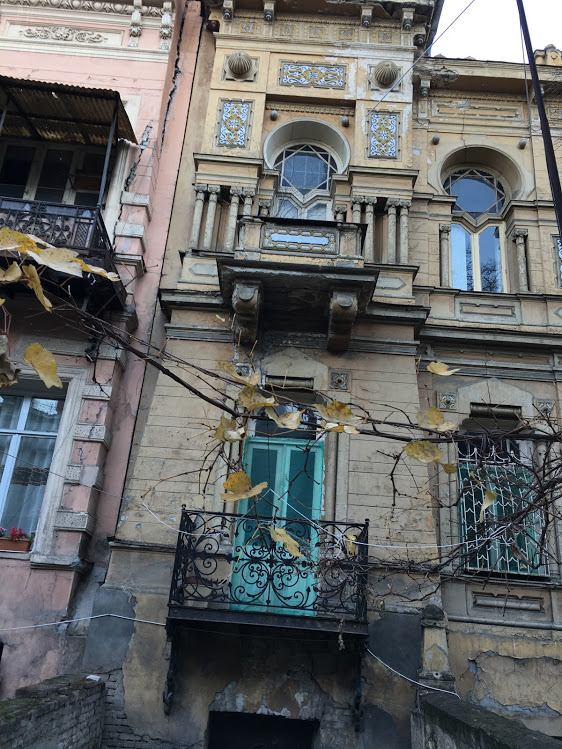 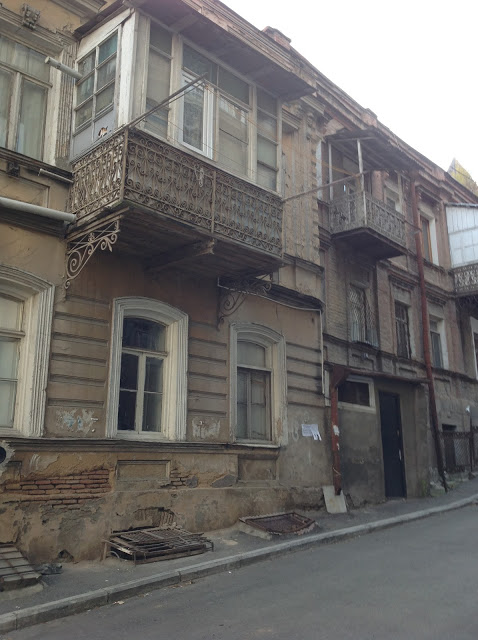 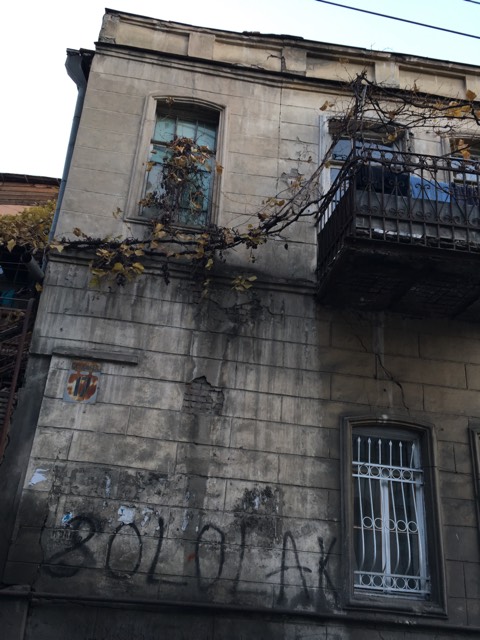 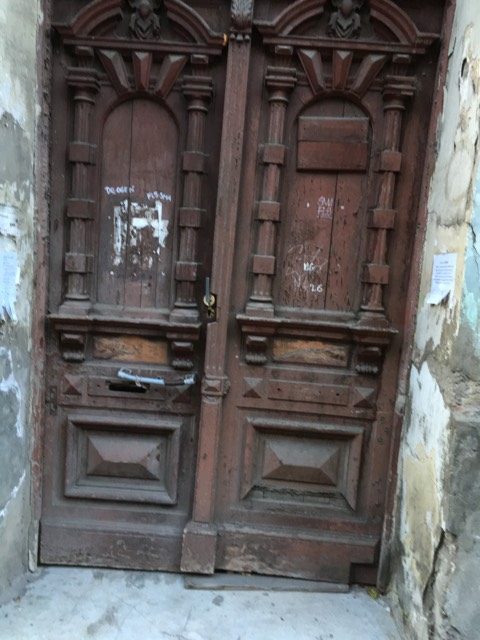 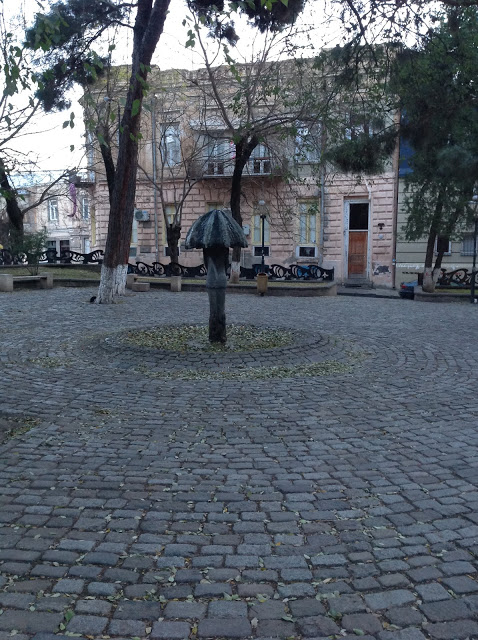 Tbilisi sounds musical and I knew almost nothing about this place other than  it being the capital of Georgia. Digging into the history  I found that Tbilisi is derived from the old Georgian  word Tipli meaning warm.The story goes like this-King of Georgia Vakhtang I Gorgasali went hunting with his falcon  and the falcon caught a pheasant.When  he went to  see the catch he found both the falcon and the pheasant  in a hot spring .Impressed with this discovery  he decided to build a city in that location and  Tbilisi was born.

We booked  an apartment through airbnb and  reached there  at 3 am.Our host and her two friends had come to receive us and soon we  were in her  19 century  apartment in the old part of the city. 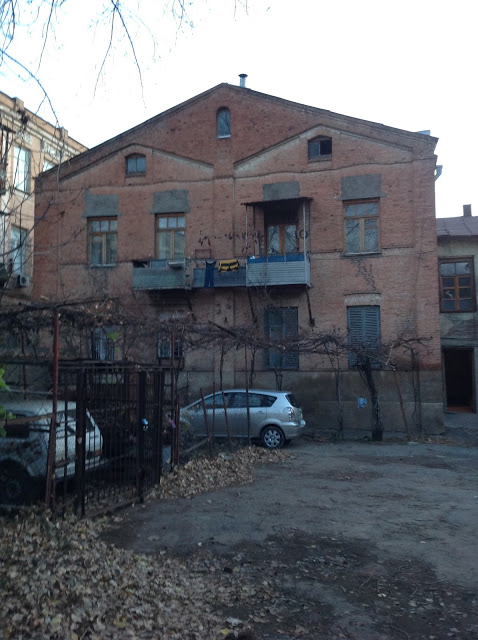 In the courtyard are the ruins of an old church and  on top of the Sololaki hill is this magnificient lady Kartvlis Deda or Mother of Georgia   holding a bowl of wine to welcome the guests and a sword to  ward off enemies.This 20 metre tall statue was made in 1958  and she symbolises the georgian spirit.

She stands tall and proud overlooking the city.I kept looking up at her in awe and tried to capture her from various angles.

The apartment was warm and cosy. It has a fireplace which I found  charming.

This was the view from the window.I did not waste any time and set out to explore the city.

One of the highlights of the visit to Nubra valley in Ladakh was the trip to Hunder valley to see the Bactrian camels. 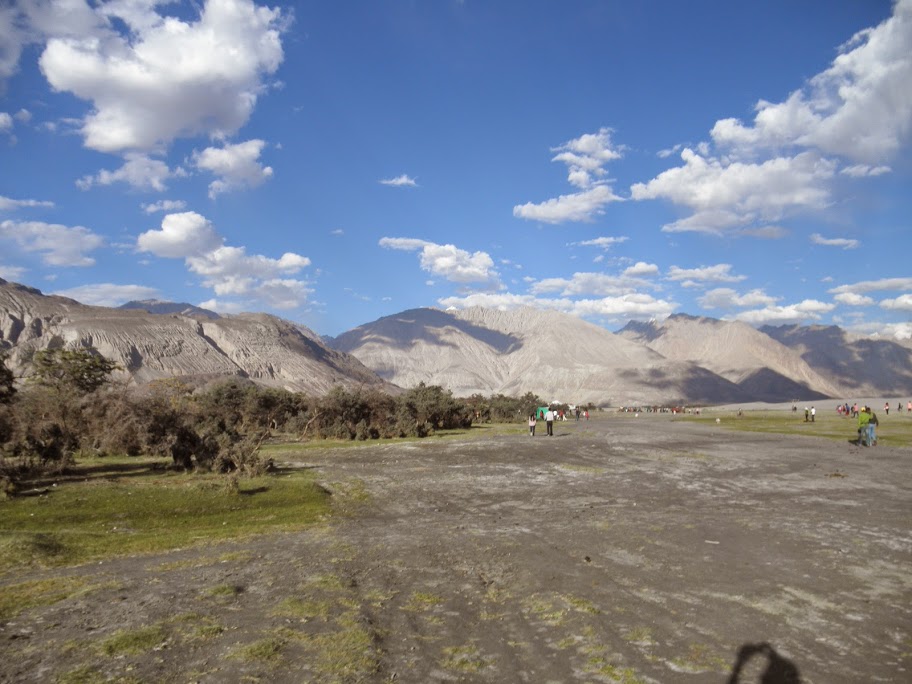 Other than the distinct anatomic feature I did not know much about them.So it was interesting to learn later that they belong to the critically endangered species.The humps are used to store fat  which can be converted to  energy  and  when the fat is  used up they become floppy.

As it was the peak tourist season  there was a long queue for the mandatory rides.I chose not to do that and was happy just being there and observing these gentle animals. 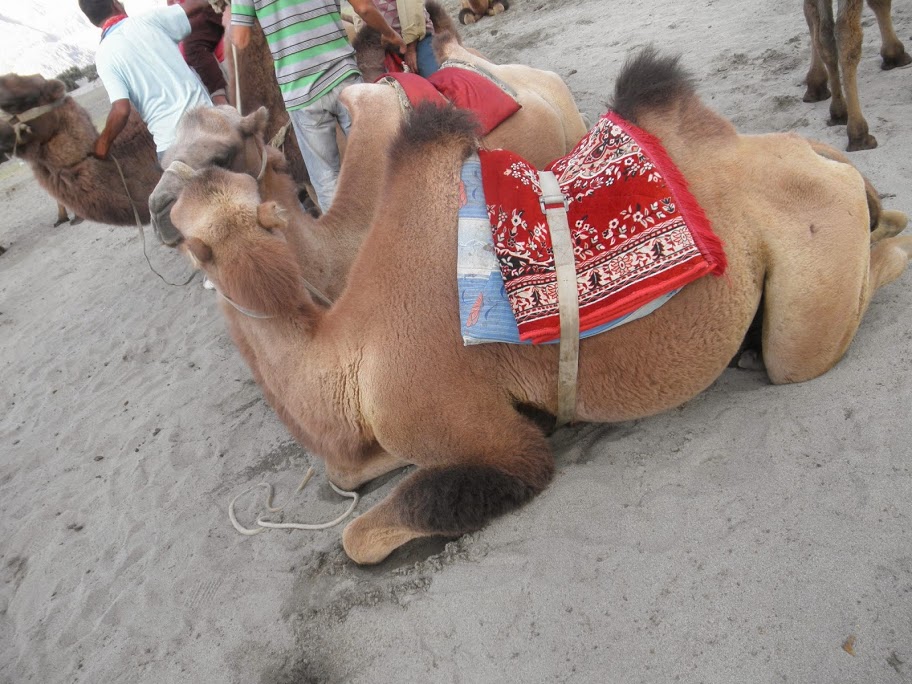 Kavita is 12 years old and Uma is 10 years .These two cousins would come to our village stay early in the morning  with a huge sack and spread out the wares like experts.They  won over us with their charming ways.We chatted with them and came to know that they are staying in a joint family and the stuff they have displayed is made by the family members.These girls have never been to school.They are learning embroidery at home.I found them very cheerful  and smart.They are quite used to tourists and have even picked up a few english words.One of them told me that she had been featured in a “foreign” magazine.The harsh living conditions  have not dampened their spirits and it was heartening to see these impish duo conducting their sale like veterans.All of us bought  something from them.

I wish I could do something more.I wish they get a chance to have some form of formal education and relish all the joys of childhood.

Ladakh is fast becoming the most favoured  destination for Indians.I was happy to see  “desis” of all age groups when I went there in August 2014.  This was on top of my wish list for a long time .Whenever I read a Leh travelogue I would tell myself that I am going there at the first  opportunity.Well ,finally I found myself in this magical land and  it was a dream coming true after months of  frenetic planning and unanticipated delays. 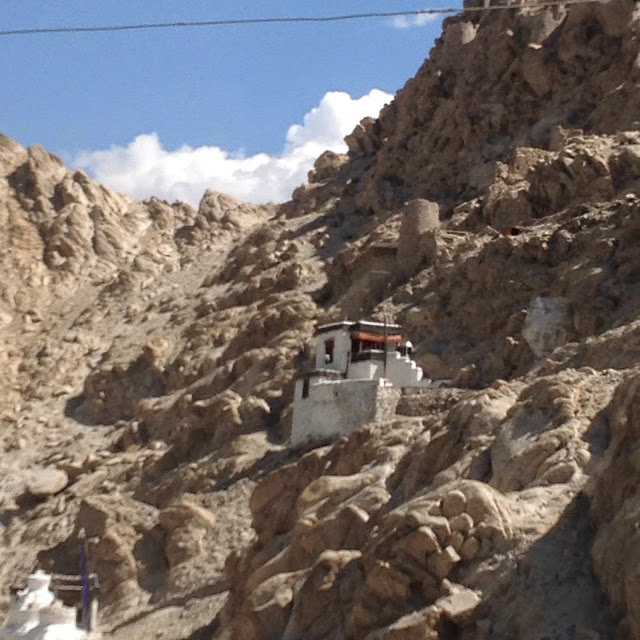 How can one process so many  emotions ?Can anyone do justice to its beauty?We can take  zillion  pictures but can we capture  all the moments?You have to be there to experience the magic .I wish this land retains its purity and charm  and that  one never gets to see a KFC or Pizza hut  there. 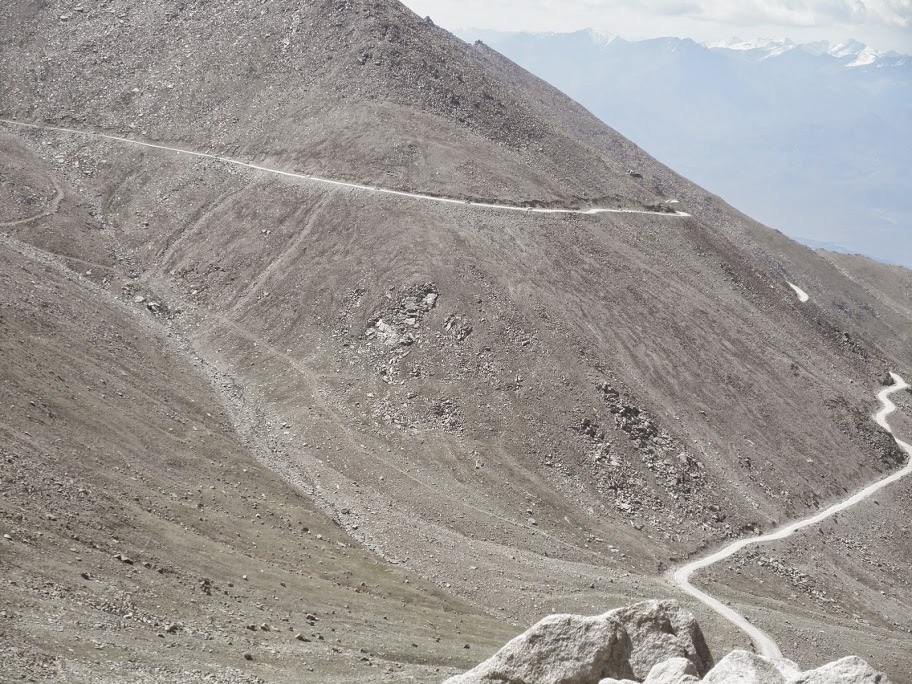 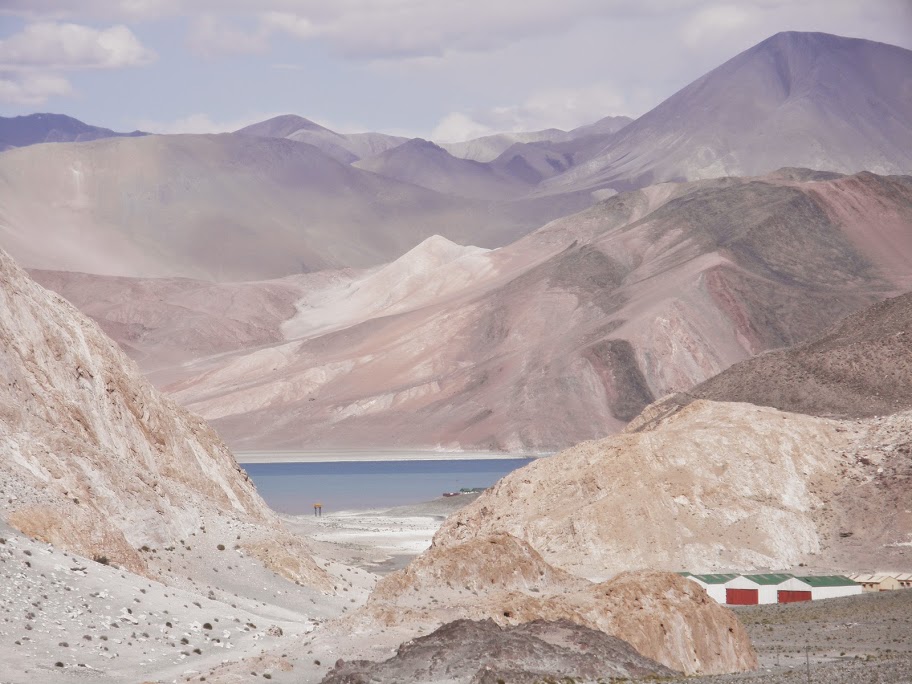 .You may go there with   minimum expectations  but I assure you that you will return   a different person.I have read that many  got the wander bug after being there once.As for me,I want to go back and explore more .Are you a wanderer? Do you have a dream destination?

Do you belong to that   group who can just take off on their own to any place of their choice or are you someone like  me  who  like to travel with at least one person ?Though I am not a socially challenged person, large group  of total strangers unnerve me and I had avoided  such trips for a long time.I have considered solo travel but somehow havent yet  accomplished that in the true sense.There was a Singapore trip 10 years back  but I was staying with a friend and explored  the city  with some of her friends.But   it was thrilling to  travel to a new place and go   around without a preset  itinerary.

After that most were with friends.Of late it is getting a wee bit difficult  to  find someone to go with you.One must have someone  with  similar interests and drive.It is not easy sharing your space with others..One of my friends  feel that a couple should travel together  before marrying as this is the best way to get to know  each other.Travelling together can be really challenging.

Presently I am looking at a  winter trip to the land of Seven Sisters.Should I go solo or  start  calling up friends ?

Feel  elated after coming back from   my first trek to Deotibba.What an awesome experience-wish I had gone  when I was younger and   less physically challenged.We were a group of thirty -youngest was a sprightly 9 year old&oldest-a robust  experienced 66 year old gentleman.We started off as  strangers and came back as a team-bonding over a period of 10 days in  difficult terrains.I had gone with some  apprehensions & came back a lot happier,calmer&energised.It was fascinating to see school kids  staying focussed  and behaving like seasoned trekkers  encouraging and helping the  nervous first timers.I did not see any tantrums or mood swings. 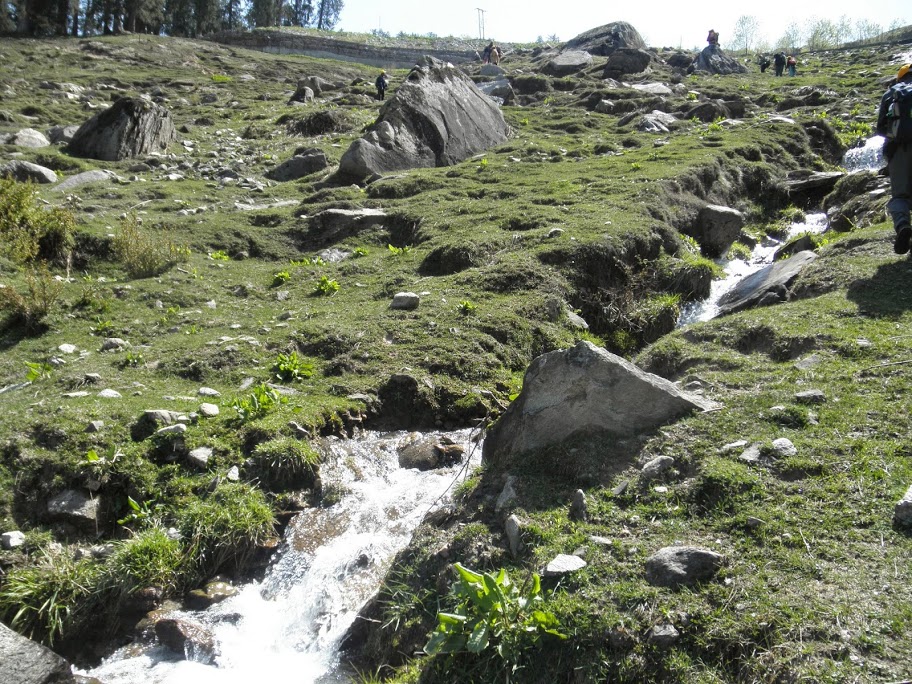 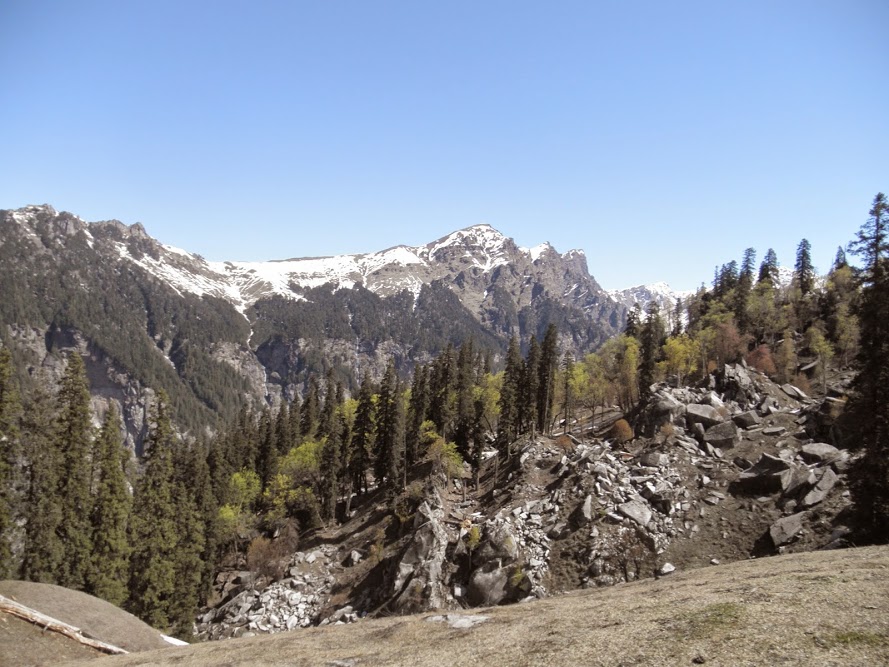 A challenging and rewarding experience and I am looking forward to more .Thank you,Himgiri Tours & Adventures.